OK, I live in Huntsville, AL (North Alabama) at approximately 1250 ft above sea level. This insect has made a nest on the porch. I believe it to be a hornet of some sort, but what type? It is about 1.5 ” long. The nest is about 4 inches in diameter. There is only a single wasp inside, but there are several larvae. Thanks!
Joe Matus 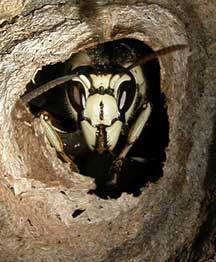 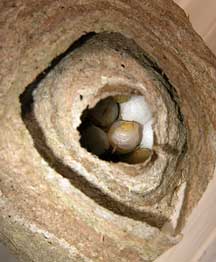 Hi Joe,
Bald-Faced Hornets, Dolichovespula maculata, are not really aggressive, but they will defend their nest (which is composed of chewed wood pulp) fiercely, stinging repeatedly. If there was a nest on our front porch, we would be very cautious, especially once the colony becomes well established. We have read that large nests can accomodate 10,000 individuals. Your colony is being started by a fertile queen. The first broods will be infertile workers. Males and young Queens will be produced in the fall and workers and males along with the old queen will die. The fertilized queen passes the winter and begins a new colony in the spring. Adults frequent flowers and will eat fruit. They pre-chew insects to feed the young. 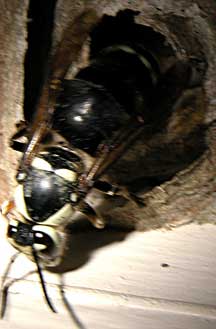 Hornets Nest at the end of the season

Canadian Swallowtail from Alaska
What's That Bug? does not endorse extermination

late summer bugs: baldfaced hornet and ?wasp?
Hi Bugman!
I am avoiding work by sorting late summer photos. I found a photo of a Bald Faced Hornet, sipping from a nectar river. Do you want a photo of it in one of its favorite “soups”? Also, a wasp that I can’t ID. I checked your wasp pages and bugguide – it seems to most closely resemble Blk& Yellow mud dauber or Ammophila, but the coloring is wrong. Its not a focused photo (sorry), but the abdomen was definitely striped. Both photos were taken mid-August 2005 near Chicago. Your site has been like a daily vitamin to me these past few months – the new photo additions remind me of summer!
Jill Anderson, Chicago 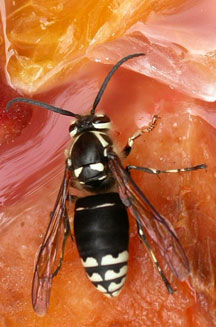 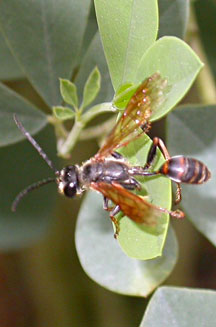 Hi Jill,
Thank you for the sweet compliment. We know exactly what it is like to avoid work, one of the reasons we started this website. Your Baldfaced Hornet photo is wonderful and we will see if Eric Eaton recognizes your Mystery Wasp. Minutes later, Eric Eaton responded: ” The mystery wasp is one of the Grass-Carrier Wasps in the genus Isodontia, closely related to mud daubers. This one is Isodontia elegans. Until rather recently, this species was thought to occur only west of the 100th meridian. I sent specimens I collected in Cincinnati to an expert, and he confirmed the ID. Isodontia are easily identified because they are the only common thread-waisted wasps that rest with their wings flared out to the sides like this. Most other, related wasps hold the wings flat over their back when at rest. There are at least four other species in the genus that are widespread in the eastern U.S. Eric “

Giant Hornet in Turkey
Two thumbs up for a fascinating and informative website. We just got back from our vacation in Turkey. We have been there a total of 8 times but never seen this wasp/hornet on previous occasions. They were very numerous. We would see them each day at our hotel poolside, but nowhere else. Some would come to the overflow grating at the side of the pool and drink the water (see photo). Others would briefly bounce off the water in flight or even stay on the surface for a few seconds before flying off also apparently taking a drink. I guess that their wingspan would be getting on for 2”. I would be most interested to hear what species this is.
After some more surfing I now assume that the beast in question is a ‘Giant Hornet with local colour variation’ as it is differently marked than the one shown 5 from the top. Interestingly on the map which shows where hornets are to be found, the part of Turkey where I saw it is NOT included (”bottom left hand corner”). I guess they are spreading. Many thanks again for a brilliantly entertaining and informative website.
All the best
Chris Pinn
Germany 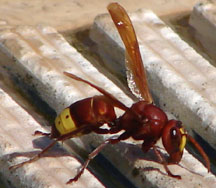 Hi Chris,
Sorry for the delay, but we are very busy lately and don’t have time to answer even a small portion of our email. We agree this is a hornet, but are not sure of the species. Lovely photo though.

Update (05/02/2006)
The Insect in the photo 10/26/2005 Turkish Hornet ( Chris Pinn Germany) is an Oriental Hornet ( Vespa Orientalis) whose range covers the eastern Mediterranean, the Arabian peninsula, Ethiopia and Somalia. All the Best
M. Leather
England

European Hornets strip lilac of bark
What's That Bug? does not endorse extermination

Wasps?
Hello! You have a great site. I have used it many times this summer. I was wondering if you can tell me what these bugs are. Are they a type of wasp? They have been stripping the bark off my lilac bush – I’m assuming they plan to lay their eggs there. Any id help would be appreciated.
Thank you.
Rene’ in MD 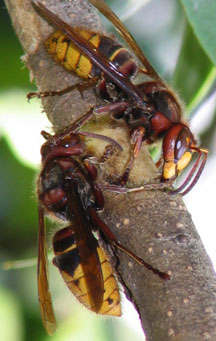 Hi Rene’,
These are Giant Hornets, Vespa crabro germana. They are found in the east. It is an introduced species. These are social hornets that build a nest in a hollow tree, under porch floor or in and outbuilding. The females in your photo are gathering bark to chew into paper pulp for the nest.

Queen European Hornet
What's That Bug? does not endorse extermination

Identity?
Is this aggressive insect a bee or a hornet? It is black and white and is new to my yard this year. 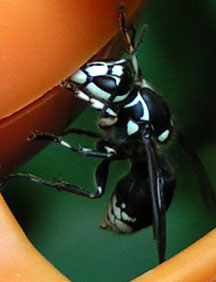 The Bald Faced Hornet, Vespula maculata, is an extremely aggressive social insect. They are extremely protective of the nest which is made of chewed wood pulp, hence paper, and will sting repeatedly.

Chastised by Eric Eaton regarding bald-faced hornet.
Daniel:
Would you please reconsider your definition of bald-faced hornets as “very aggressive?” I have come right up to a nest before, and was completely ignored by the occupants coming and going and working on the exterior envelope of the nest. Sure, jiggle the nest and you’d have a major problem on your hands (and face, and the rest of your body:-), but they are quite serene normally, and are NOT the scavengers that other kinds of yellowjackets are. In fact, they prey almost exclusively on flies, so are good to have around. One more anecdote. We once had a small nest in a camelia bush right next to the front door of the house. Never knew it was there until late fall when we pruned the tree! By then the nest was abandoned.
Have a great weekend. Eric

Wasp identification needed
Hey there,
First things first – GREAT SITE!! Trying to do a what’s this? on the “new tenants” at the farm. My husband and I finally got back up to the farm (truck repairs – done! 🙂 ) and on our drive around he spotted these guys in the shrubs. Not quite sure what they are. Definitely wasps, maybe hornets. They have a white face and their abdomen is white with black stripes. The nest is “paper” and approximately 12″ x 12″ = HUGE. We weren’t too fired up about getting real close, although I was tempted (another good picture for me) and we kept the windows up in the truck! They’ve been working on this about 4 weeks, at least that’s how long it’s been since I was here – trimming the shrubbery.
Thank you much,
Debora and Randy W.
Person County, North Carolina 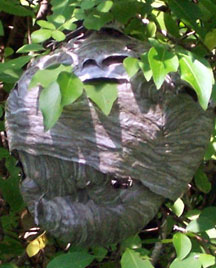 Hi Debora and Randy,
By all means, do not try to get us a close-up of the Bald Faced Hornets, Vespula maculata, busily building their nest. They are very aggressive and defensive of their nest. They will sting repeatedly if disturbed.