Queen yellow Jacket
I looked and you don’t have a pic of a Queen Yellow Jacket, well here she Is she has been visiting for about a week now since the weather has been consistantly warm. I have been feeding her and any bugs that come along on my deck were I leave maple syrup,strawberry jam meat products and a dish of water. I get a pretty good turn out! lol Also this Is Naugatuck,Connecticut taken on 5/11/08. Enjoy,
DAve 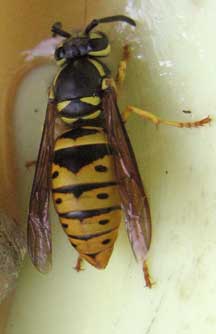 Hi Dave,
Your photo is a near perfect match to one posted to BugGuide of an Eastern Yellow Jacket queen, Vespula maculifrons.

Lesser Banded Hornet from Singapore
What's That Bug? does not endorse extermination

Survival of the fittest
Hi guys,
I check your site daily. I find it endlessly fascinating! I found this struggle between the yellow jacket and some sort of spider going on this morning on my barbed wire fence. Can you identify the spider? I don’t normally see such light-colored spiders. Thanks for your help.
Susan Rockwell
Alva, FL (Southwest Florida) 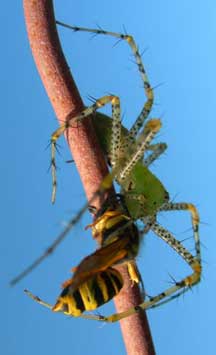 Hi Susan,
Your spider, the Green Lynx Spider, was our featured Bug of the Month for November. We are especially fond of these hunting spiders that do not build webs, preferring instead to leap at flying insects. In our garden, they frequently perch on flowers like roses and daisies, and the coloration of the spider blends with the foliage of the plants. Thanks for sending us your awesome Food Chain image.

Air attack by hornets on crab
In Oman recently, observed some hornets attacking a crab which was defending a piece of discarded food on the beach. Three hornets ended up attacking together from different directions. The crab just swiped at them with its big claw. The hornets gave up in the end. Hope the pictures are of interest.
John Jackson 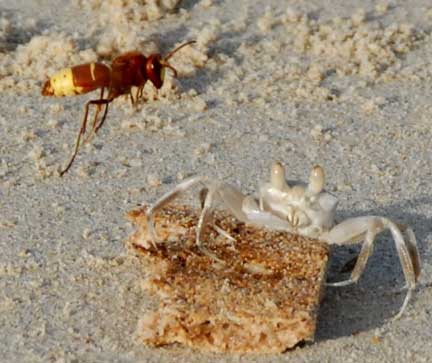 Hi John,
Wow, what action photos you have sent us. These are Oriental Hornets, Vespa orientalis, and they are social wasps. We found a website that identifies them, lists the distribution as northern africa, western asia and madagascar, and gives other information about them. We are not sure what type of crab it is and we haven’t the time to research that right now. 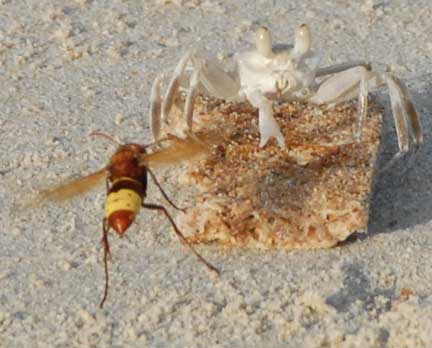 Update (12/03/2007) crab vs. hornet
that has to be the funniest picture I have ever seen! It’s like David and Goliath. I guess the hornets thought it was worth the try. I’m sure the crab was laughing! happy holidays
Lee Weber
Nottingham PA

Hi Lee,
We agree that these photos are quite amazing. We were in a big rush to post them this morning before going to work.

Update: (12/05/2007) The crab and the oriental hornets
Hi Daniel,
The crab in those really great pictures is a species of Ghost Crab, genus Ocypode. They are called ghost crabs because at least some of the species are so well camouflaged that they are pretty much invisible on the sand until they move, which is often very rapidly indeed! In the Caribbean they come out of their burrows towards the end of the day. I don’t know which species this would be, as there are apparently 5 different species in the genus in Oman. All the very best,
Susan Hewitt

Edible Bugs
O’siyo Oginalii, (Hello, my friend)
I am Aniyunwiya (Tsalagi or Cherokee), descended from those who were not captured and sent to out west, or confined to North Carolina. I found your page after a painter asked what the cocoons on my house were. I said, “Bagworms” and he said that could not be right. He was incorrect. I have spent the last hour looking through your site, and have added it to my “Favorites.” I would like to share a couple of recipes with you. Yellowjacket grubs can be made into soup after removing them from the comb, which is best achieved by placing the comb upon a fire (or a stove) until the covering is parched–this makes it easier to remove the grubs. Next, brown them in the oven. They are good to eat like this, or they may now be used in soup. Early morning or late afternoon is the best time to harvest the comb. Locusts also are edible. It is best to gather them immediately after they have emerged from their shells, otherwise you will have to peel them. Gather them after dark, or they will not be good. Wash them and fry them. They may be eaten hot or cold.
Tla-i-ga (BlueJay)

Wow Tla-i-ga,
We are sure David Gracer will be thrilled with this information.

Bald Faced Hornet
What's That Bug? does not endorse extermination

Red Wasp Sting
My husband had a severe allergic reaction to a sting by this wasp in central Oklahoma. The best name I found for it was a “wood eating wasp.” What is the name of this wasp and how dangerous are they?
Kristy

Hi Kristy,
These are Red Wasps, Polistes carolina, one of the Paper Wasps. They chew wood into pulp to make a paper nest. They can sting, are not aggressive, but an allergic reaction is often dangerous.

Keep those Pesty Neighbors from stealing fruit with a Decoy Hornet's Nest!!!!!

Hornet Nest
What's That Bug? does not endorse extermination

bald facedhornet
This is a hornet gathering wood fibers from an old shed in our yard in Lancaster county, Pa. Every summer, they come to eat! There are usually 3 to 4 there at any given time. The cool thing is you can hear the scraping noise as they gather wood fibers. They don’t even mind if we get close- they’re too focused on their job. Enjoy the photo- we sure enjoy the website!
Lee Weber 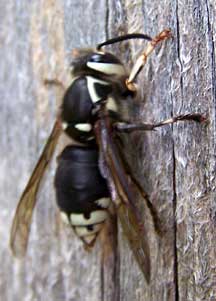 Hi Lee,
Nice photo. As a point of clarification, Bald Faced Hornets do not eat wood. They feed on nectar, fruit and other insects. Pre-chewed insects are fed to the larvae. They are gathering wood to chew into pulp for their nest.