Hi there,
I love your website, and find myself checking it regularly. I thought you might like a couple of photos I took. The walking sticks are clearly happy and content on my house wall.
Grace E. Pedalino
Troy, Virginia 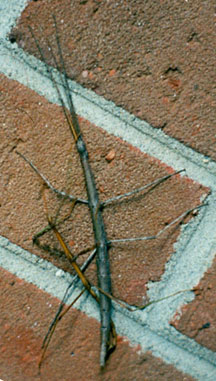 Hi Grace,
And by the look of your intimate moment photo, there will be a new generation of Walkingsticks next year. Also check out Grace’s great Preying Mantis photo and maternal Wolf Spider.

Stick Insect from New Guinea
What's That Bug? does not endorse extermination


Musk-Mare Walkingstick and her stallion

What’s this bug?
I have never seen anything like this bug. It literally looks like a piece of wood. Being that I’m in Florida, I don’t know if it flew away, hopped away or got eaten by something even bigger. By the way, does it bite? Does it eat wood? Yes, I still have a door! Or, is it just hanging around waiting for it’s next meal? 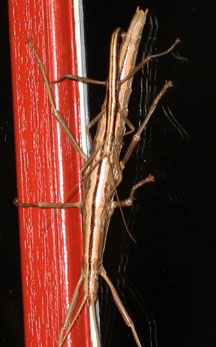 Your “It” is acutally “Them”. You have a pair of Two-lined Walkingsticks, Anisomorpha buprestoides, also known as Musk-Mares or Devil Riders because of their habit of remaining in coitus for extremely long periods of time, as witnessed in your photograph. Beware!! They do not bite but they can spray a noxious substance from their necks that is painful if it gets in your eye. We are toying with the idea of adding a “Sex” or “Love among the Bugs” page to our site and we will definitely use your image when that day arrives.

So my “it” was a “them” doing “it!” Too funny! Not only was your website helpful; but, very educational as well. Thank you so much for your help.

Mating Muskmares
What's That Bug? does not endorse extermination

found a bug in my garage
I found this bug in my garage that caught me by surprise. When I moved it with my broom, it started to attack the broom with it’s stinger. Creeped me out!!
Tony 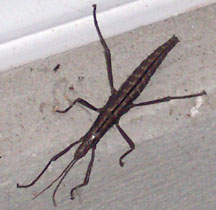 Hi Tony,
We wrote to Eric Eaton to see if he could give us a species name for your Walkingstick. He wrote: “This is indeed a walkingstick, specifically Anisomorpha buprestoides, and a female. The species goes by regional names like "devil-rider" and "musk-mare," in reference to the fact that mating pairs can remain coupled for days at a time; also, they can squirt a potent, foul, milky substance from glands in their neck. If they hit you in the eye it is truly painful, aparently not damaging otherwise.” The Walkingstick doesn’t have a stinger, but you want to steer clear of that noxious secretion.

Fantasy Phasmid is a Hoax

Shorthorned Walkingstick from Nevada
What's That Bug? does not endorse extermination

stick bugs
We have some stick bugs as pets. we started out with four and had them a good long time. one by one they died, and we put their cage away. some time later we went to use the cage for a toad the kids found and to our surprise there were baby stick bugs in it. well we ended up with four nice size stick bugs again. we love them , they make great little pets. our question is , how will we know if they laid eggs? and what do the eggs look like? I hope when we lose the ones we have it will not be the end of our bugs.
thank you for any help you can give me.
Mary in Montana 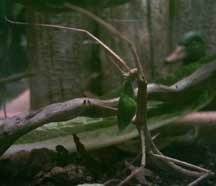 Hi Mary,
Walkingsticks, Family Phasmidae, are much more common in the South than the North, which is probably why you have the Northern Walkingstick, Diapheromera femorata. The males grow to 3 inches and females to 3 3/4 inches in length. They range north to Alberta Canada. They will eat the leaves of many deciduous trees but especially like oak and hazelnut. The female drops her eggs singly and they overwinter among ground litter, hatching in the spring. I guess someone never cleaned the cage before putting it away which is why you wound up with nymphs for a second generation of pets. I have heard that when there is a large population of Walkingsticks laying eggs in the forest, the eggs dropping sound like falling rain.

Another Walkingstick from Puerto Rico

Western Shorthorned Walkingstick
What's That Bug? does not endorse extermination

Bug questions
Hello.
Could you please tell me what this bug is. I think it may be called a stick bug, but I’m not sure. This one was about seven inches long and hanging out on my
sliding glass door. Very creepy. Do they bite or sting?
Thanks much.
Dianne 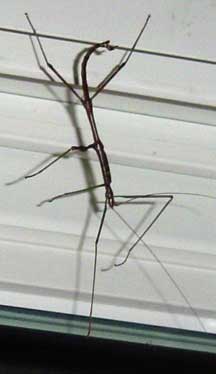 Beautiful Walking Stick photo Dianne,
They do not bite, but some Florida species are known to spray a noxious fluid when disturbed. Your specimen is benign.

Western Short-Horned Walkingstick
What's That Bug? does not endorse extermination

Attached is also a picture of one of many walkingsticks roaming around.
Thank you for your help,
Darin, Melissa and Spencer 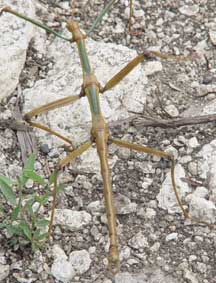 We just got this photo in.

Hi,
I would like to see if you can identify an insect for us. Sorry I have no picture, so I will try to describe it. As near as I can describe, it is like a fat walking stick. Usually about 2 inches long, 1/4 to 3/8" wide in the middle, brownish in color, and with a smaller version (1 inch long and skinny) riding piggy back. They were sighted climbing pine trees in central Arkansas.
thanks for your help,
Jon

Dear Jon,
Close relatives of the Walkingsticks are a group of insects known as Timemas, Family Timemidae. They differ from Walkingsticks in being smaller and more robust in form. There is a great deal of guessing and speculation concernin the habits of this insect and many have reported it as feeding on coniferous trees. All forms are arboreal, and while they may be found on all kinds of trees during the mating season in May and June, they apparently feed largely in not entirely on deciduous trees. Our California species are a bright leaf green with occasional decidedly pink specimens. It has been reported that other species are brownish in color. Here is an image I downloaded of specimens in a collection. 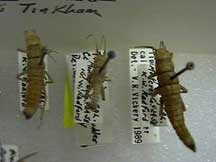 Walkingstick from Ecuador
What's That Bug? does not endorse extermination