Subject: Ecuadorian Crab Spider
Location: Ecuadorian Amazonia
May 23, 2012 4:47 pm
Last year I posted an image of this species looking for an identification. In April I was back in Ecuadorian Amazonia and I spotted another of these beautiful orange spiders with bluish legs. My guide, a Shuar indian, said it was a crab spider. This was one of your answers in 2011. I was able to capture the eyes this time.
Signature: John R. Anderson

Hi John,
We will link to your original posting.  We decided to do some additional research.  First we located this YouTube video identified as being in the family Sparassidae, the Giant Crab Spiders.  Then we located this photo on FlickR identified as a Wandering Spider in the family Ctenidae.  Then we found this FlickR image identified as a Giant Crab Spider in the genus Sadala, and finally, we found the same photo with the same identification on FlickRiver as part of the Bigal River Conservation Project in Northeast Ecuador.

Daniel,
Did you reach a conclusion?
One problem in the jungle is the lack of good reference materials. An anima’ls name could be passed from one guide to the next (or one generation to the next) with no way to verify the knowledge. When one uses a term like “wandering spider” it seems very general.
In the end, this is one of the most beautiful spiders I have ever encountered. Just curious.
Thanks,
John R. Anderson

Hi again John,
We are more inclined to speculate that it is the Giant Crab Spider or Huntsman Spider family Sparassidae.  As far as verifying the genus Sadala goes, both sources can be traced to the same original so there is no verification.  In our opinion, you should seek assistance from an expert if you want to confirm any identification.

Karl provides some information
Hi Daniel and John:
Since this lovely spider has made another appearance on your site I felt compelled to give it another go. It is not difficult to find images of this spider on the internet but finding information that is useful for identification purposes has proven to be very frustrating. In addition to the three possible families that have already been mentioned in this and the previous post I also found one site with two photos that looked like they were probably of the same spider, but suggesting it was a Running Crab Spider (Philodromidae). I chose to ignore it and pressed on. I eventually came up with genus Olios, a Huntsman Spider in the family Sparassidae (by the way the eyes in this second posting do look like Sparassidae to me). You can check out online photos identified as Olios sp. here, here, and here. I found several others as well but I was having trouble with the hyperlinks. I checked out several spider lists for Ecuador and it appears that there are two species of Olios in Ecuador, O. corallinus and O. niveomaculatus, but I could find no photos or useful information for either. Until you get confirmation from a real expert, I hope this helps more than it confuses.  Regards.  Karl

Thanks for your research Karl.

Giant Crab Spider from Maldives
What's That Bug? does not endorse extermination

Ecuadorian Spider
Location: Ecuador Rain Forest
March 3, 2011 3:43 pm
I spotted this spider during a night hike near the Cuyabeno Wildlife Reserve in Ecuador. The length of the body was about 1.5”, and fore leg tip to rear leg tip about 3”. The bright coloring certainly indicated ”stay away” to me. The legs appeared slightly blue under my flashlight. The body is a reddish orange.
Signature: John R. Anderson

Dear John,
This is a beautiful Spider.  We believe it is a Huntsman Spider in the family Sparassidae, also known as Giant Crab Spiders. Huntsman Spiders do not build webs and many are nocturnal hunters that wander about in search of prey.  Most Huntsman Spiders are harmless, though their large size often induces fear when they are encountered.  It is our understanding that there are some dangerous venomous South American Huntsman Spiders, and the aposematic warning colors on this specimen may indicate that it is a highly venomous species.

Karl provides some insight
Hi Daniel and John:
What a lovely spider! It’s too bad the eyes aren’t visible as they are often the best way to determine a spider’s family. It has been said often on this site that you can’t trust everything you find on the internet when it comes to bug identification, and here is a good example of why that is sage advice. I thought I was on the right track when I found this image of what was identified as a Wandering Spider (Ctenidae), but the trail soon grew cold and I got suspicious. I little more searching turned up this promising photo of a Huntsman Spider (Sparassidae), but again I could find nothing more to confirm that this was the right beast. Finally, I came across several photos suggesting it belonged to the family Platoridae. In this case, however, I couldn’t even confirm that this family still exists, with several sites suggesting that it had been dismantled and re-distributed among several other families (e.g., Trochanteriidae). If I had to choose I would probably favour a Wandering Spider, but this is going to require a lot more expertise than I have to offer (and I have to run and pack for Mexico, with bugs and spiders on my brain). Regards. Karl

Huntsman Spider and Tarantula from Baja California, Mexico
What's That Bug? does not endorse extermination

Roatan Honduras Spider? Crab?
Location: Roatan, Honduras
January 2, 2011 10:44 pm
I snapped this photo of what I thought was a huge spider on Roatan Honduras. The local told me it was a crab, not a spider. Any ideas?
Signature: Thanks! Laurie

Dear Laurie,
It is impossible to be certain because of the angle of your photograph, but we believe this is a Huntsman Spider, possibly Heteropoda venatoria.  It is not a crab.

Wandering Spider from Costa Rica
What's That Bug? does not endorse extermination

Wandering spider in Ecuadorian Chocó
January 1, 2010
Dear Bugman!
Being in Ecuador there is plenty of opportunity for ecological experience.
On a night walk in a forest area in Puerto Quito (Western lowland, Chocó region) I almost stepped on this interesting fellow in December 2009. It was a rainy night.
The spider was standing on the ground, hardly moving, even when I measured its body length. It was about 31-32 mm, and its leg span between 11 and 12 cm. Quite impressive and grey as a wolf.
However, I can’t tell wether this might be a giant crab spider/huntsman spider or a wandering spider. The animal was not aggressive at all, but turned into a defensive position (shown on the other photo) when I measured it with a “paper ruler”.
When I returned later it had disappeared.
Might this even be a Phoneutria species?
Thank you so much for an answer, I’m very curious!
Dan Jestrzemski,
Germany
Puerto Quito, Western Ecuador

Happy New Year Dan,
We don’t really have the necessary skills to answer your questions, but we will post your photos in the hopes that one of our readers might assist.  In North America, Giant Crab Spiders or Huntsman Spiders in the family Sparasidae are quite harmless, though it is our understanding that some tropical Huntsman Spiders can be quite venomous.  We would not discount your speculation that this might be a dangerous Wandering Spider in the genus Phoneutria which may be seen on Wikipedia.

Huntsman Spider or Wandering Spider from Borneo???
What's That Bug? does not endorse extermination

Brazilian wandering spider
Hi guys,
I searched your site hi and low trying to identify this little beauty I found when clearing out my shed the other day. I caught it in a jar, photographed it and let it go out the back and when I released it it actually ran after me. Every time I stopped it would change direction and come after me again. Eventually, after going through several links, I have identified it as a Brazilian Wandering Spider Phoneutria nigriventer and to quote from Wikipedia ” The Brazilian wandering spiders appear in the Guinness Book of World Records 2007 for the most venomous animal. These spiders are notorious both due to their toxic venom, and because they are not reluctant to attack people who appear threatening. ” After reading this I thought I should have released it a bit farther from home.
Martin 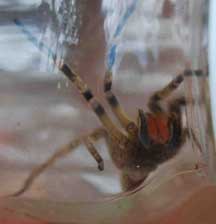 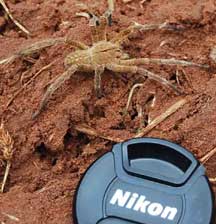 Huntsman Spider (or Wandering Spider) from Ecuador
What's That Bug? does not endorse extermination

spider in my shoe
Hi guys,
Here’s a spider that jumped out of my sandal when I put my foot into it. This was in January 2005 at the Serena park station in Corcovado National Park, Costa Rica. Thanks for your help!
Reisa Latorra 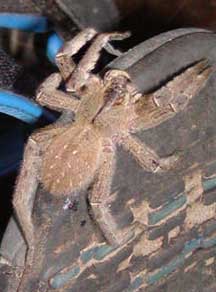 Hi Reisa,
Back in February 2006, we received two letters with images of spiders from Costa Rica and Ecuador. At that time, we identified them as Wandering Spiders. Eric Eaton wrote: “either in the family Ctenidae or Sparassidae. They tend to be more common, and even larger than, wolf spiders in the tropics. At least one species, Phoneutria fera, is extremely aggressive, with potentially deadly venom. Do not mess with large spiders in Central and South America! The venomous types are very difficult to distinguish from harmless species, and in any event, a bite is going to be really painful. These spiders sometimes stow away in bananas, houseplants, and other exported goods, so they can show up in odd places. Be careful where you put your hands.” We found a site with an image of Phoneutria fera, and the coloration is different, but the body shape is very similar.

Wandering Spider from Costa Rica
What's That Bug? does not endorse extermination