What Are These Lepidopterans?
September 12, 2009
My younger son and I found this Lepidopteran sheltering on the underside of a petrol-pump in Pickens, Mississippi, today (09.12.09) in late afternoon (apx 17:00). We put it into a small container and brought it home to show to The Budding Naturalist, because we knew he would be fascinated.  Its antenna are smooth-looking, but not clubbed, and its body is fat and stubby, white except at the very tip of the tail end, which is a coppery yellowish colour. At rest, its clear, blackish-brown margined wings are spread wide, and its silhouette is generally triangular, with a slight scallop to the lower edge of the wings. Also, when at rest, the tail end curves up and out.  I’ve lived in the Mid-South all my life, and I have never seen a specimen like this one, and I’m not having any luck finding anything similar online. Can you help?I am also attaching a shot of what we think is Manduca quinquemaculatus (5-spotted hawkmoth) which my son reared from a caterpillar. (He is currently rearing several of these tomato hornworms that he saved from his Grandma’s garden–she wanted to smush it!)And a shot of what we think is a Synchlora aerata that showed up a few days ago on the siding of our front porch in Memphis, TN.
Editormum and the Bug Boys
Southern United States, MS and west TN

Dear Editormum and Bug Boys,
Your unidentified moth is a Melonworm Moth, Diaphania hyalinata.  We have identified this moth in the past, but we were unable to remember its name, so we searched our archives until we found a posting from 2008.  According to BugGuide:  “Larvae feed on cucumber family plants: cucumber, melon, squash. Can be pests. Many generations (3?) in south, disperses northward in fall, does not persist there.”  Your other identifications seem correct to us.

Cucumber Moth from Namibia
What's That Bug? does not endorse extermination

What are these moths?
Sat, Apr 11, 2009 at 8:32 AM
We live in Western Pennsylvania, and seem to have found moths which have eaten some of a wool rug we have in a storage area. We started finding them a couple of weeks ago on our walls and ceilings. I have killed about 6 of them. I did my spring cleaning and found some damage on the edge of a wool rug. I am assuming these are the culprits, but I can’t find these on the web to id them.
Moth
Western Pa

Dear Moth,
These are mating Meal Moths and they would be feeding on your stored grain products, not your wool rugs. Generally when we get photos of Pantry Moths, it is the smaller Indian Meal Moth, Plodia interpunctella, but your moths are the Meal Moth, Pyralis farinalis. It has a worldwide distribution. According to our Audubon Guide, the “Caterpillar eats grains, meal, bran, husks, straw, and moist stored hay. … Cleanliness and frequent emptying of storage bins are the best means of controlling this insect. Its caterpillars spin tubular webs amond food, eating from an open end.” We would advise that you check the pantry to see if you have an infestation in the oatmeal or other likely food source.

Indian Meal Moth
What's That Bug? does not endorse extermination

whats this moth?
i found this moth on my ceiling in my room. i live in naples, florida, and have never seen any moth like this before. i have never seen a moth with such a weird fluffy butt?? It also has a pointy front end. It kind of leads me to think this moth might be of some sort of danger, but I can’t find it anywhere online and don’t know where to start when trying to name the fluffy balls??? Thanks for your time!!!
Jessica Rainey 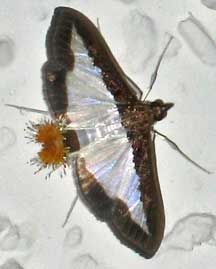 Hi Jessica,
The Melonworm Moth, Diaphania hyalinata, which is found in the southern states, is considered a pest of melons, cucumbers and related plants. It is the caterpillar and not the moth that does the damage.

Melonworm Moth
What's That Bug? does not endorse extermination

bristle tailed moth?
Hi there
we live in Honduras, central America – found this little guy today – have you seen anything like this before? I would be interested to know many thanks!
Joy B 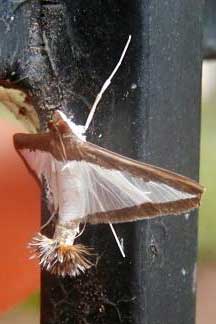 Hi Joy,
We first identified this moth in November 2005 when a photo was sent to us from Yucatan near Belize. It is the Melonworm Moth, Diaphania hyalinata. The caterpillar is a pest of cucumber, melons, pumpkins and squash. We are not sure if it is coincidental or not, but we received two letters from Honduras today.

Crambid Snout Moth from Southern California
What's That Bug? does not endorse extermination

Help, help … Moth? Butterfly? What-in-the-world IS this?
Hi! What a delight to find your website while searching for “moth tufted tail” !! I’m so curious about the “identity” of this striking little moth (or butterfly?)I found on my door screen in Houston, Texas on a morning in October 2005. It was about 3/4 inches from wingtip to wingtip. Can you tell me what it is?
Thanks in advance!
Ginger

Hi Ginger,
Just last month, we posted a photo of Diaphania hyalinata which goes by the common name Melonworm Moth.

Sparganothis Fruitworm Moth on Hemp
What's That Bug? does not endorse extermination