Cricket?
I can’t tell you what a find you were on the internet. Today, I was photographing insects on milk weed. I found six different insects. These three are not in any of my books. I think this is a tree cricket of some kind.
They where in Orland Grassland in Orland Park Illinois.Thanks again… you are great!
Suzanne

Immature Bush Katydid
What's That Bug? does not endorse extermination

What the hell is this Bug? 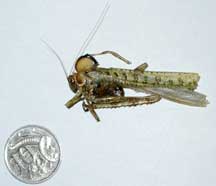 It is some type of dead and sqashed Orthopteran, probably a grasshopper. Though the body is very short, the long straight wings and long jumping legs indicate some type of grasshopper. Your coin is unfamiliar, and you gave no location, so any attempt at an exact species is impossible.

Update: (05/30/2006) Recently, upon receiving additional images of this Crested Katydid, we properly identified it on our Katydid page. This letter just arrived though.
I can ID both the coin and the ‘hopper on your 02/19/2004 entry It’s the crested Grasshopper (Alectoria superba family Tettigonidae) and is a native of central Australia as is the Australian 10 cent coin shown with it! Actually – no need as I see several other people have already done so ahead of me. I liked the site tho’
Sincerely
Martyn Robinson

Hi Martyn,
Thanks to your letter, we realized we still had an unidentified image of the Crested Katydid remaining on the grasshopper page. We have posted your letter and cleaned up our classification.

Raspy Cricket from Australia
What's That Bug? does not endorse extermination

We have Fork Tailed Bush Katydids eating our Chryslar Imperial roses at the What’s That Bug? Headquarters. 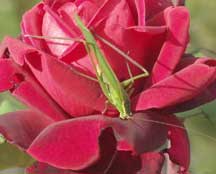 Katydid from Madagascar
What's That Bug? does not endorse extermination

Big Green Bug?
We’ve just seen an unusual bug clinging for dear life on the side of my front steps. It is large, with a yellowish green body and legs (six of them), two long antennae, raised back and a flat head and about 2" long and 1" wide. Can you tell me what this might be? It didn’t move while we were looking at it or taking pictures of it. Thank you.
DJ

Dear DJ,
Where are the photos and where do you live? Without additional information, it could be many things. Katydids resemble green grasshoppers, and do have long antennae. Please send photos if you have them. I appologize for the delay in replying, but our website is down because of heavy traffic.

I just sent the photos in a separate e-mail. I live in North Carolina.
DJ 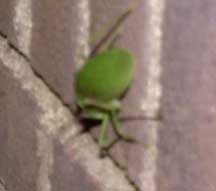 Hi DJ,
Thanks for the photos. Even though they are out of focus, I can see you have a male Katydid. The female has a long ovipositor for depositing her eggs on branches. Exact species is indeterminable in your photo, but it appears to be the True Katydid, Pterophylla camellifolia. The male is musical, producing sounds by rubbing the wing covers, which have rasps and ridges, together like a fiddle and bow. Those night sounds are used to attract a mate. They are sometimes attracted to lights at night.

Unknown Pink Katydid from Brazil
What's That Bug? does not endorse extermination

Bugman,
OK, my girlfriend and I are at odds over the common southern night "noisy" bug that (I’ve
always understood) to be the Katydid or Secada (sp?)…..You know, the guy that makes that
loud odd buzzing sound at dusk……… So, I think it’s a Katydid or Secada and she says it’s a "July Fly"…… I bet it’s the same thing….. Please help us out……
Phil (Huntsville, AL.)

Dear Phil,
Katydids have a more musical song and Cicadas make the buzzing noise. July Fly could be a local name, but not one that I have heard. Cicadas are often compared in appearance to large flies.

Conehead Katydid
What's That Bug? does not endorse extermination

Hi,
I’ve wasted at least an hour on the web trying to identify the bugs on my tomato plants. I had hoped I could simply locate them without having to ask, but apparently not.The only thing that it almost looks like is the nymph squash bug, but that’s definitely not what I’ve got. The body is orange with little black dots on the abdomen, and it has six black legs and it has a sucker that it sticks into the plant like a mosquito in your skin. I originally thought they were harmless as they appeared all of a sudden one day but didn’t seem to be doing any damage.I shook them off, but they keep coming back–now I squish them if I can find them. They are less than a centimeter long and leave my leaves with a million little pinprick-looking holes–I’m not sure if they’re eating the fruit. Also, I haven’t been able to locate any eggs, or a younger or older version. Please, hopefully you can tell me what these things are!
Thanks,
Tracy in Louisiana

Dear Tracy,
It sounds like you may have the nymph stage of the Keelbacked Treehopper (Antianthe expansa) which feeds on solanaceous garden plants, mainly peppers and tomatoes, though I have also found them on eggplant. The adults are green and winged, and sometimes appear along with large colonies of nymphs. They move quickly, trying to avoid danger. They have sucking mouthparts, and drain the life giving sap from their host plants, so though they do not eat the tomatoes proper, they can do considerable damage to the plants. This is compounded by the secretion of honeydew, which attracts ants as well as increasing the chances for secondary infections to the plants. Eradicate them.

Hello again,
Sorry to report, but that’s not what I’ve got. The bodies are much skinnier and they really are distinctly orange with just the few little black dots on the abdomen. I’ve captured one and noticed that they molt and right afterwards, their whole bodies (including legs and antennae and sucker) are orange temporarily, then the legs antennae and sucker go back to black.If you can’t identify them, it isn’t the end of the world. But do you think that if I water the plants with soapy water it will kill them? (This was my mom’s suggestion.) And does the type of soap matter? (I used Palmolive)
Thanks again,
Tracy Morton

Hi again Tracy,
Let’s try this again.;Sometimes the nymph stage of an insect is radically different from the adult, at least in color. Most katydids are green, but the nymph of the Fork-Tailed Bush Katydid (Scudderia mexicana), as well as other members of the genus Scudderia, is orange with blue and black markings. Try looking at the photo of Scudderia furnica on this website to see it that is what you have. Remember, there are slight color variations between individuals. http://kaweahoaks.com/html/katydid.html
Regarding the soapy water question: make sure that the soap is very dilute, or it might do more damage to your plants than the bugs you are trying to eradicate. I like Ivory, but Palmolive is also mild.


October 1. 2002 it looked like a grasshopper with way long legs like if a spider and a grasshopper mated or something and i think it might have been able to fly, im in the midwest, please tell me what this evil creature was that scared me nearly to death? jenny

Dear Jenny,
Was it green? It might be a species of katydid. Check out other letters on our site that go into details about the habits and life cycles of these relatives of the grasshoppers. It isn’t really evil, and though they eat the leaves of plants, they are not known to occur in such large numbers to really be considered a pest. There are many romantic stories associated with katydids.

Katydid from Indonesia
What's That Bug? does not endorse extermination