‘Articulated” Rove Beetle?
June 13, 2010
Hi guys,
Here is an odd one. I believe it is a Rove Beetle but can’t find anything with the ‘articulated’ thorax. Have you got anything like it on your side of the world? About 20mm long and has 16 (or more, hard to count from the picture) antennae segments.
aussietrev
Queensland Australia

Hi Trevor,
We agree that this is some Rove Beetle.  According to BugGuide:  “In typical form, body appears to be divided into four parts when viewed from above” indicating that the articulation you describe is not limited to this species, but is a family characteristic that is more pronounced in your beetle.  Perhaps someone will be able to identify your Rove Beetle.

Update
June 15, 2010
Hi guys,
Hope the fishing was good. Thanks to a comment posted by mardikavana I was able to track down this link
http://www.ento.csiro.au/education/insects/embioptera.html
which shows a shot of this as a Metoligotoma species in the family Embioptera
In reference to the stated areas where it is found, my place is inland by about 200kms, hardly coastal.
regards,
Trevor

Hi again Trevor,
We leave for the airport in a few hours.  We will move your posting to the Webspinner category of Embioptera.

Bug crawling on slime
Hi,
I took these pictures last night – can’t find anything on your website to identify it, although it looks very unique and is quite easily described.
Could you please help me identify it? And maybe an opinion as to it’s destructiveness and whether I should try to eliminate it? Thank you,
Ken Johnson 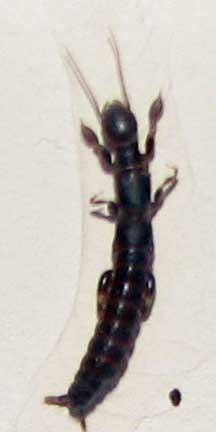 Hi Ken,
This is a Webspinner. It is only the second photo we have ever received from the Order Embiidina, commonly called Webspinners or sometimes Footspinners. Some males are winged, and some males and all females are wingless. According to BugGuide: “silk galleries are spun under stones and bark, in debris, cracks in soil or bark, among grass roots, lichens, mosses, and epiphytic plants winged males of some species are attracted to artificial light” and they are “more numerous during the rainy season” and their food consists of “dead plant material plus lichens and mosses found around their galleries.” They are not destructive and there is no need to eliminate them.

Now for some whatsthatbug.com business:
I’ve been able to at least guess at most of my critters, thanks to a copy of Hogue’s classic Insects of the LA Basin, but this one has me stumped (see whazzat.jpg, attached). It was on a native Wild Buckwheat in my Encino, CA front yard, in mid-July, a couple of years ago. To give you an idea of scale, the flower head shown is maybe an inch in diameter. What is it?
Thanks,
Chuck 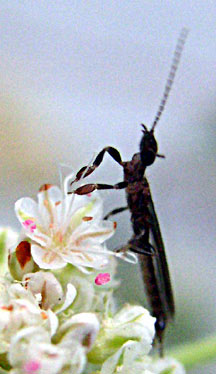 Hi Chuck,
We turned to Eric Eaton for help with this one, and his response has generated a new page for us. Here is what Eric has to say: “Ok, the top one is a webspinner, probably a male, as I think in the common specises the females are wingless. Used to be the order Embioptera, now it is something else. Thanks for sharing the nice images. Eric” Here is what Audubon has to say about Webspinners: “Uncommon insects, Webspinners are represented by only 10 species in North America, restricted to the Gulf states and the West Coast. There are about 150 species known worldwide. These brownish or yellowish insects live in colonies inside the silken galleries they spin among mosses, or in cavities in the soil. They have slender, cylindrical bodies with threadlike antennae, chewing mouthparts, short stout legs, and 1 or 2 asymmetrical appendages called cerci at the tip of the abdomen. Only males have 4 downy, brownish wings. The fore wings are longer than the hind wings and well separated from them. Webspinners spin silken webs from glands on the tarsi of their fore legs. Females eat mostly decayed plant matter, but males are carnivorous. When disturbed, Webspinners run rapidly backward to their nests, or sometimes play dead. Females lay clusters of elongated, curved eggs in the silk-lined tunnels, which they carefully guard. Metamorphosis is simple: both males and females become sexually mature, and the males gain wings.”