Weaver Ant from Thailand: Queen (or Male ?)
Here’s a queen from the colony (or a male, not sure). Note how it has a green body (like weaver ants in Australia) unlike the workers. Regards
Sean 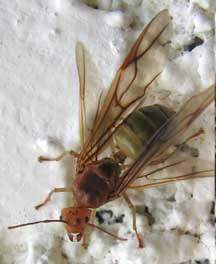 Hi again Sean,
Thank you for your wonderful additions to our site.

Update:  March 9, 2014
Upon researching a Green Tree Ant from Malaysia, we discovered this old posting which we are now relatively confident is the same species, Oecophylla smaragdina.

Bulldog Ant Alate from Australia
What's That Bug? does not endorse extermination

Oecophylla (Weaver Ant)
Hello Bugman
I thought your viewers may enjoy this picture of what I guess is an Oecophylla (Weaver Ant) having a chew on my finger. These little bundles of joy are probably the dominant predators in our garden give or take the odd snake. We live in Thailand. Regards
Sean 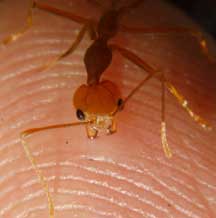 Hi Sean,
Thank you for sending us your photo of a Weaver Ant. We did some research, and would love it if you could provide us with an image of the nest they weave from living leaves.

Update: (01/04/2007)
Here’s a picture of one of the small satellite nests. The main soccer ball size nests (and there are many) are high up in a Jack Fruit tree and I can’t get a clear picture unfortunately. The tree is visible on Google Earth so I’ve attached a .kmz file so you can see where these ants are in Thailand. I don’t think that Wikipedia article is quite right with respect to ‘…and are known for their painful, irritating sting’. Thankfully they’re stingless. I guess they don’t need a sting with those jaws. They seem to do very well without one. Regards
Sean 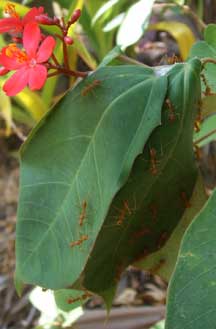 Hi again Sean,
Thanks so much for the additonal photo and information.

Driver Ant, AKA Sausage Fly from Rwanda
What's That Bug? does not endorse extermination

Peppermint Oil for Ants
Hi! I absolutely love your site and cruise it just for fun. I was thrilled to death to find a suggestion about using peppermint oil to deter ants. It works great! They won’t cross the lines that I painted and just the fumes alone have driven the rest away. And it’s cheap! A bottle from the health food store was only $4.99 and a little goes a very long way. But make sure you wash your hands before you touch your face or anywhere else more delicate. And now I don’t have to rescue all the ants out of the sink before I can use it- which was getting very frustrating and time-consuming. (I know, my husband thinks I’m crazy too … but I’m slowly converting him – he now takes all bugs outside except for black widows which he still squishes – but I’m working on that.) Thanks so much for all your hard work!
Laurie McBride

Swarming Ant Mystery
What's That Bug? does not endorse extermination

Ant or Wasp?
Hi WTB,
I found this wasp or maybe ant in my driveway this morning when I went to take the trash out. I also saw a second one trying to right itself out of a small puddle on our walkway. I’m in central Mexico, in San Miguel de Allende, and we’ve had a bit of rain the last few days, including last night. This creature is about 1 1/2″ – 2″ in length with fuzzy thorax, and the rear section is very bulbous with shiny dark brown stripped sections. The overall color is kind of a reddish brown. The antennae are straight so it doesn’t quite look like a tarantula hawk. And while it looks like a wasp there doesn’t seem to be a stinger. So I’m uncertain as to whether this is a wasp or an ant. It also was originally upside down and I picked it up by the wing to put it right. Doesn’t appear to be aggressive. There are pinchers on the mouthparts. A look on your wasp pages and ant pages left me clueless as did a search on bug guide since I wasn’t too sure exactly what specifically to look for. Hoping you can shed some light on this.
Thanks in advance,
Stefanie 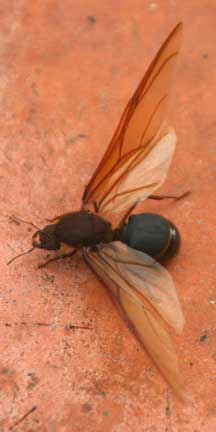 Hi Stephanie,
We saw these same enormous Flying Ants many years ago in Chiatla, Puebla, Mexico. There was an incredible swarm after a rain. We don’t know the species but we will do some research.

Mexican flying Ant
Hello Daniel and Lisa Anne,
I am in love with your site, and visit it daily. The flying ant is from the genus Atta, the leaf-cutting ants. In fact she is an alate, a winged Queen. These insects are known as “Hormigas Culonas” (‘big-bottom ants,’ in reference to their quite substantial abdomens) in Colombia, where they are so esteemed as a delicacy that they appear to be in danger of overharvesting. I’ve eaten them — though, alas, not fresh from the source — and can report a taste like bacon and pistachio nut combined. Edible insects are my passion, and I’ve been thinking about sending you a couple of images. If you’d be willing to include a link to my site, that would be fantastic.
All the best,
Dave Gracer
www.slshrimp.com

Leafcutter Ant Alate from Mexico
What's That Bug? does not endorse extermination

Some neat bugs!
Hi Bugman!
Near Lake Erie, while birding, I spotted this ant. It seemed ‘different’ to me and I’m cluelss as to his unwilling meal. I found it and others like it climbing a tree of which half was rotten. (The rotten half had a delightful colony of baby garter snakes looking up into the bright sun above). Thanks for your help.
Cathy Wilson 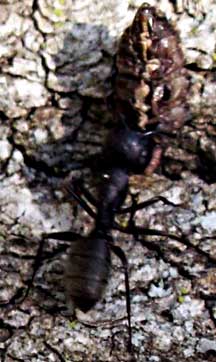 Unusual Ant Swarm
What's That Bug? does not endorse extermination

Ant? Termite? Freak of nature?
Can you tell me exactly what these are? They range from 3/8 inch to almost 1 inch.
Thank you,
Andre’ 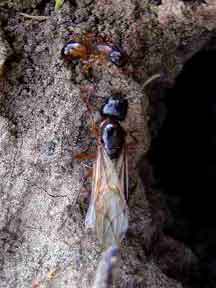 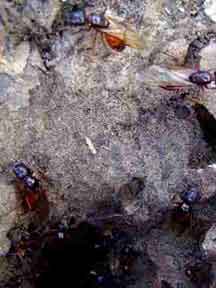 Request to use a Photo