scary giant moth
Location: san diego … my dresser
August 23, 2011 12:14 am
Dear Bugman,
What I consider to be a very large moth flew into my room tonight and seems to have no immediate plans to leave. This is unfortunate because I cannot sleep with him over on my dresser… staring at me. I live in San Diego, and it is mid-October. Knowing what kind of moth he is won’t get him out of my room, but it will help with the details of my Facebook posts about this little intruder.
Signature: sandi 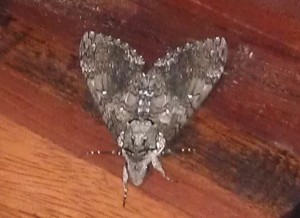 Hi Sandi,
Though California is far from the tobacco growing Carolinas, you are still within the range of Manduca sexta, also commonly called the Carolina Sphinx or Tobacco Hornworm for the caterpillar.  In California, the large green caterpillars with a caudal horn are frequently found feeding on the leaves of cultivated tomato plants, though they also feed on native jimsonweed and other members of the nighshade family.  You can read additional information on the Carolina Sphinx on the Sphingidae of the Americas website.  The distinctively marked abdomen with six pairs of yellow spots is not visible in your photograph.  P.S.  It is currently August.  Is this an old event?

Ha! I could try to say the October/August issue was because of autocorrect on my phone, but nope. I’m just completely confused about the month. I guess they both start with a soft “o” sound kind of. The picture was taken last night, mid-August.  🙂   I wanted to ask the moth to spread his wings for the picture, so I could see his abdomen, but he kind of freaked me out, so I passed. He finally flew back out the door at about 2:30am.  He seemed to fly from wall to another, not gracefully . . .like headfirst, top speed into one wall, then another. Poor guy had to have a concussion by the time he left.
Thanks for getting back to me so quickly!
Sandi

Sphinx Moths are powerful fliers, fast and with endurance, and quite beautiful in flight when they are not obstructed.   Apparently they are not good at figuring mazes.