Subject: Mysterious Blackberry-Shaped Bug
Location: Murphys, CA (central-eastern California)
July 28, 2015 3:43 pm
Hi,
A friend of mine recently found a strange bug inside a cabin she’s staying at for the weekend, and we’ve been trying to find what kind of insect it is but with no luck. It moves slowly, is slightly smaller than a dime, and is covered in shiny black bumps, so that it almost looks like a miniature blackberry. We can identify small pincers but she wasn’t able to see how many legs there were. Someone mentioned that it could be a transport unit for ticks, but I wasn’t aware that there was such a thing. Any insight would be greatly appreciated. Thanks!
Signature: Winslow 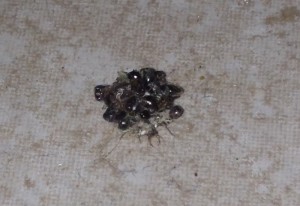 Dear Winslow,
This is a predatory Lacewing Larva, and larval Lacewings frequently camouflage themselves with the carcasses of prey.  It appears as though your individual has been eating Black Ants, which explains its resemblance to a blackberry.