big bug
Location: little rock california
June 28, 2011 4:04 am
What is this thing looks like a huge beetle with pincher’s of death and hisses like a roach
Signature: idk 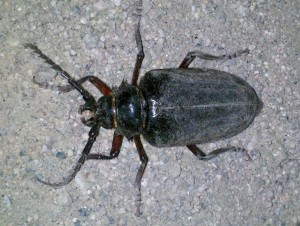 Dear idk,
This beauty is a male California Root Borer, Prionus californicus, and while we agree that he is a huge beetle, females of the species can be almost twice as large.  See this BugGuide image for a size comparison between the sexes.  What you are calling “pincher’s of death” are the well developed mandibles that can be used for defense, though the primary function is to enable an adult beetle to chew its way out of the wooden chamber where it pupated.  Larvae bore into wood, primarily roots, feeding on the wood for several years before maturing.  The mandibles can probably snap a small twig and adult California Root Borers should be handled with caution to avoid being pinched.  The hissing is called stridulation and it is a sound produced by many beetles upon rubbing together specific body parts.