Caddisfly in the Snow!!!

Subject: Bug ID
Location: Bridger Mountains, Montana
January 24, 2017 4:00 pm
This bug was found outside of Bozeman, Montana, in the Gallatin National Forest. A nordic skier was skiing down an unplowed road and saw the bug walking on top of the snow. Nearby tree species include Douglas-fir, Engelmann spruce, lodgepole pine, and subalpine fir.
Signature: Johanna Nosal 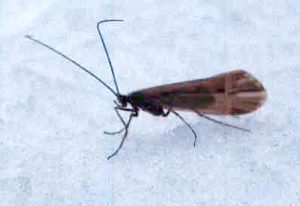 Dear Johanna,
This is a Caddisfly, an insect in the order Trichoptera that is generally found near a source of fresh, clean water because their larvae are aquatic nymphs sometimes called Caseworms because they build protective covers from sticks, stones or shells.  It is our understanding that Caddisflies found in the snow are known as Snow Sedges.  We found this reference to a Snow Sedge on BugGuide, however the information page for the genus on BugGuide does not indicate Snow Sedge is a common name.  TroutNet does identify Snow Sedges and has this to report:  “These caddisflies may be important to the winter angler because they are one of the only insects around.”  Your posting has inspired us to create a “Snow Bugs” tag because we have numerous postings in our archive of insects in the snow, though it was not until now that we decided to organize them together into a dedicated data base. 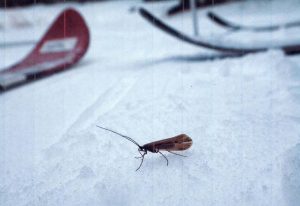 Caddisfly in the Snow