Subject:  Flies on Zululand coast
Geographic location of the bug:  South Africa, KwaZulu Natal, Mabibi
Date: 01/25/2019
Time: 03:25 PM EDT
Your letter to the bugman:  Flies on a tree in coastal Zululand. Mabibi.
How you want your letter signed:bewilderbeast 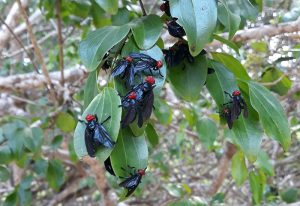 Dear bewilderbeast,
These are really crazy looking Flies, almost like toy flies.  This is only the second posting we have made in 17 years of the Buzzard Signal Fly, Bromophila caffra, from South Africa.  According to WTB? contributor Piotr Naskrecki on his awesome blog The Smaller Majority where he uses the descriptive common name Red Headed Fly, they are:  “large, slow moving insects, reluctant to take to the air, and much happier to hang in clusters from low tree branches. They are truly striking animals, showy and clearly unconcerned about attracting anybody’s attention, including that of potential predators. …  But for an insect as conspicuous and common as the Red-headed fly, shockingly little is known about its biology. In fact, the last scientific paper that mentions it by name (according to an extensive MetaLib cross-database search) is from 1915, and it does so only to compare the fly’s strikingly red head to another species. As already pointed out in an excellent post about this species by Ted C. MacRae, there exists only anecdotal evidence that the larvae of this species might be feeding on the roots of Terminalia trees, potentially sequestering toxic cyclic triterpenes, which would explain the adult flies’ aposematic coloration. But, as is the case with so many African invertebrates, nobody really knows.”  A very detailed image of the Buzzard Signal Fly can be found on Encyclopedia of Life. 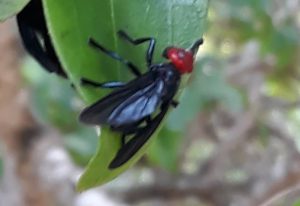