Subject: She’s carrying her babies on her back!
Location: Mt. Hood, OR
August 22, 2014 9:35 pm
Dear Bugman,
This bug flew into my house tonight. I thought it was a bumble bee at first because it’s about the same size as one and it also has black and yellow markings, When I caught it to let it outside I noticed it was covered in little bugs. I took pictures thinking you might want some. They may not have turned out very well though…
Is it some kind of beetle?
Signature: D

I figured out it’s a burying beetle and those are mites. Thank you for you’re time. 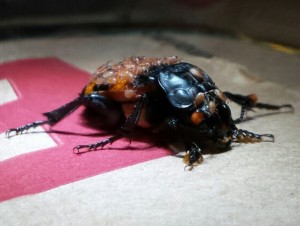 Dear D,
Sorry about the delay, but we have been playing tour guide to out of town visitors for the past two days.  You are correct that this is a Burying Beetle covered in Phoretic Mites.  Your initial guess was understandable as some arthropods carry around young on their backs, including Scorpions and Wolf Spiders, but very few insects utilize that means of protecting young.  One rarity is the habit of some Giant Water Bugs to have the female cement the eggs to the back of the male Giant Water Bug to protect, but only until the eggs hatch.