Subject: Burying beetle in Washington St.
Location: Olympic Peninsula Washington St
September 19, 2014 11:02 am
I found a burying beetle covered with mites. I put it in a jar, not knowing what it is. As far as I can tell, it is not harmful, but it is not native to the Olympic Peninsula. I see it is endangered and the mites are beneficial to forest soils. I guess I will let it go, but I was hoping to touch bases with someone else first. Any advice?
Signature: Colleen 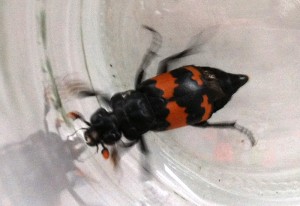 Dear Colleen,
The American Burying Beetle is the endangered species that is not found in your area, however, other members of the genus are local species for you.  This may be a Margined Burying Beetle, Nicrophorus marginatus, which is described on BugGuide.  We advise you to release it.