Subject: Beetle with some tag-alongs in Bay Area California
Location: Palo Alto, California
January 12, 2017 5:54 pm
Hi,
I stumbled on this site while trying to identify a beetle that wandered into our apartment a few days ago on a cold, rainy evening. It’s black and shiny, and at first I thought it had some moss on its back, so I put it in a jar to look at it closer and show my 2-year-old son who loves bugs and beetles. The next morning I discovered all of the little brown dots were not moss, and were indeed animals which were crawling all over the beetle! I put a leaf in which seems to be satisfying both the beetle and the tag-alongs (aphids?).
Needless to say, I’m curious what beetle this is and why it’d be carrying around dozens of smaller bugs.
Signature: Beetle Dad 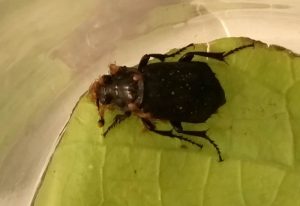 Dear Beetle Dad,
This is a Burying Beetle or Sexton Beetle in the genus Nicrophorus.  Most Burying Beetles are black with orange markings, so we believe your all black individual is the Black Burying Beetle, Nicrophorus nigrita based on images posted to BugGuide where the range is listed as”Pacific US states & so. BC.”  The small creatures are Phoretic Mites which use the more mobile Burying Beetle for transportation.