On May 31, 2015 · Category: Horntails, Wood Wasps and Sawflies Tagged With: bug of the month · Add Comment

Subject: Giant insect in Seattle
Location: Seattle, Wa
May 31, 2015 12:03 am
I saw this giant insect on an Italian plum in late May in Seattle. It was a warm 75 degree day. It moved slowly on the branches and the butt was pulsating. I made direct eye contact with her. She looked me right in my eyes.
Signature: Bugged out 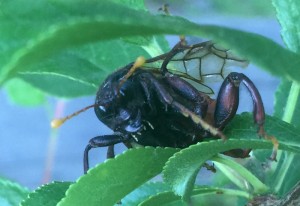 Dear Bugged out,
Though it is in the same insect order as wasps and bees, this Elm Sawfly, Cimbex americana, is perfectly harmless to humans as it is incapable of stinging.  A day earlier, we received another identification request for a “Bee with yellow tipped antennae” and we suspected it too was an Elm Sawfly.  Your images are of a living specimen and the other is dead, and we much prefer images of living insects to those of dead insects, so we decided to feature your submission as the Bug of the Month for June 2015.  The Elm Sawfly, according to BugGuide:  “hosts include elm (Ulmus), maple (Acer), birch (Betula), willow (Salix), and basswood (Tilia); adults girdle bark on twigs.” 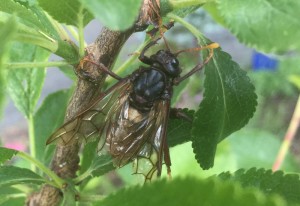 Thanks for the info and for featuring the sawfly! The insect will live out her natural life as we choose not to kill anyone.
Thank you again!
Joe Mirabella

Bug of the Month October 2011: Wolf Spider with Spiderlings

Sawfly
Tagged with → bug of the month
Location: Seattle, Washington