Beetle?
Hello,
Hoping you can help us to identify this bug. We were having a memorial day cookout, and someone almost stepped on it – looks to me like a type of cockroach, or maybe some flavor of click beetle, but I cannot figure it out for sure. Thanks for any tips/help 🙂 Seemed to have 2 sets of wings, with a leathery covering, and it would “bob” it’s head while we were checking it out. It was approximately 3-4 inches long.
Dan

Electric Light Bug
Unknown Beetle
Hi
We found this beetle on our deck. We have never seen one like this before and was wondering if we can let it go or if it is a hazard to this area. We live in Kitchener, Ontario Canada Thankyou
Dave Crawford 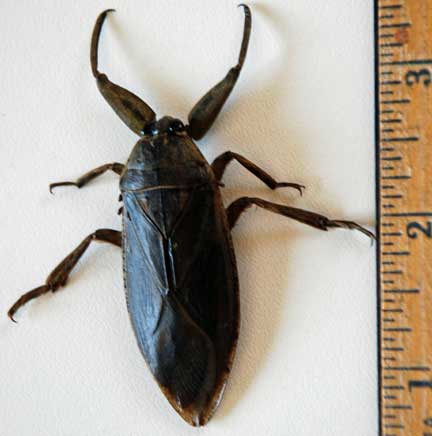 Dear Dan and Dave,
After receiving numerous requests for the identification of the Giant Water Bug, Lethocerus americanus, in the past week, we decided to make it the featured Bug of the Month for June 2008. We get requests for the identification of Giant Water Bugs throughout the year from around the world, including many from our forces in Iraq. We are writing this posting on Memorial Day, and can only hope that our letters from Iraq begin to taper off as our troops return home. It should be noted that letters sent to us from other places in the world are different species, but all Giant Water Bugs look very similar. In Thailand, where they grow very large, they are eaten, so you can find entries on them on our Edible Insect pages. One other common name for the Giant Water Bug is Electric Light Bug because they are attracted, sometimes in great numbers, to lights. They have been known to decend in swarms to outdoor sporting events and brightly lit parking lots. The common name Toe-Biter has just fallen out of favor with us after we were chastised by a reader for saying that the bite of the Giant Water Bug (and its relative the Water Scorpion) is painful. The bite is painful, but these insects only bite human occasionally. Equally streamlined in the water and in the air, the Giant Water Bug is quite clumsy on land.