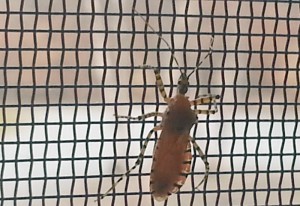 Hi Barbara,
This is a Sycamore Assassin Bug in the genus Pselliopus and since it is the second individual from the US that we received in the past two days, we suspect there are other Sycamore Assassin Bugs showing up in the area.  The Sycamore Assassin Bug from Tennessee was found in the kitchen sink.  You didn’t clarify if your individual was on the inside looking out or the outside looking in.  According to BugGuide there are three eastern species and they look quite similar.  We don’t feel too confident trying to identify your Sycamore Assassin Bug to the species level.  BugGuide states:  “Adults hibernate under rocks, bark, sometimes in groups” and there is no mention of them trying to hibernate in homes, but through the years, we have gotten enough reports of them being found indoors in the winter that we can make that assumption.  Pselliopus barberi is found in Virginia and according to BugGuide, it “overwinter as adults.”  Another eastern species is   Pselliopus barberi and according to BugGuide, it is:  “Dull orange, marked with black and white, especially legs and antennae (1). Pselliopus cinctus and Pselliopus barberi appear to be the two widespread species in the eastern United States. Dull-orange adults from this area are likely (?) cinctus, and bright orange ones are likely (?) barberi. This guide is being written somewhat provisionally at the species level.”  Based on that information, we are guessing that your individual is most likely Pselliopus barberi.  BugGuide also indicates:  “Adults likely overwinter.”  Since it is the last day of the year and the month, it is time to select a Bug of the Month for January, and since we have had two sightings in two days of Sycamore Assassin Bugs, we have decided to feature your submission as Bug of the Month for January 2013.

Thank you! He was inside. Stinky when I had to squish hIm. No others sited (yet).

Thanks for the clarification Barbara.  This particular species of Assassin Bug did not pose a threat to you or your home, however, many Assassin Bugs deliver a painful bite if carelessly handled.  We cannot recall any incidents of folks writing to us about being bitten by a Sycamore Assassin Bug.

Bug Of The Month March 2013: Mantisfly

Bug of the Month February 2020: Assassin Bug
Tagged with → bug of the month
Location: Virginia

10 Responses to Bug of the Month January 2013: Sycamore Assassin Bug