Choosing the Bug of the Month each month is an enjoyable ritual, and generally we select a recent letter for the honor. Sadly, we have not received a recent letter that is appropriate since we like to select a critter that our readership is likely to encounter while the letter is posted. We have dug through the archives for a nice image of the Polka Dot Wasp Moth, Syntomeida epilais, a wasp mimic moth that readers from Florida and other southern states often write to us about. The Polka Dot Wasp Moth is not a seasonal sighting, and according to BugGuide, it can be found year round. 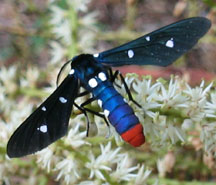 The Polka Dot Wasp Moth is also known as the Oleander Moth because one of the favorite larval foods is the deadly oleander. The caterpillars are known as Oleander Caterpillars and readers frequently write about the large numbers of orange caterpillars with black hairs that are defoliating their oleander plants.