Ed. Note: December 1, 2010
Since summer is approaching in the Southern Hemisphere, we are beginning to get more identification requests from Australia.  There are many different species of Cicadas in Australia and they are given very unusual common names.  We hope that we receive numerous photographs of Australian Cicadas this year and hopefully, making this Green Grocer that was sent in about a week ago the Bug of the Moth will encourage other submissions of Cicadas.

Large Green Flying Insect
Location: Ascot Vale, Melbourne
November 22, 2010 11:49 pm
Hello
Can you please help me identify this fly found in my sister’s garden? It was bigger than my thumb and quite fat.
Signature: LC 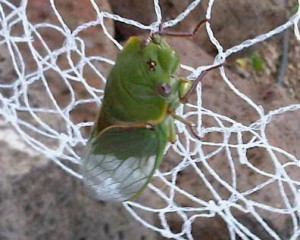 Dear LC,
You have netted a Green Grocer Cicada, Cyclochila australasiae, one of many species of Cicada found in Australia that have fascinating and colorful common names.  According to Oz Animals:  “The Green Grocer Cicada is a common cicada along eastern Australia. It has a loud high pitched call and is one of the loudest insects in the world. The most common form is green, and another fairly common form is the yellow form (the Yellow Monday). Less common colour variations are dark tan (Chocolate Soldier) and turquoise blue (Blue Moon). Most forms have red eyes, although the Blue Form has purple blue eyes. The Masked Devil is an orange brown form with a black mask across the eyes that is more common at higher altitudes.”  Now that winter is fast approaching in North America, our northern hemisphere identification requests are tapering off, but each year at this time, we get numerous requests from Australia and other southern hemisphere locations.  Your letter is the first Cicada image from Australia this season.

3 thoughts on “Bug of the Month December 2010: Green Grocer is first Australian Cicada of the Season”