Bug of the Month February 2017: Fiddler Beetle from Australia

On January 31, 2017 · Category: Scarab Beetles Tagged With: bug of the month, WTB? Down Under · Add Comment

Subject: Can you please help.
Location: Canberra Australia
January 31, 2017 2:09 am
Hello thank you for taking the time to help me out I am wondering if you can help me identify this bug? I’m in Canberra Australia and right now it’s summer thank you
Signature: Andy 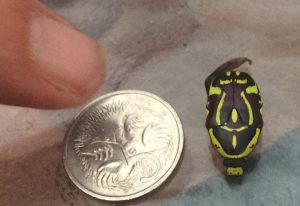 Dear Andy,
Normally, we do not like to repeat our Bug of the Month designations, but submissions in January and February are at their lowest, and we just realized it is the Ten Year Anniversary of the Fiddler Beetle, Eupoecila australasiae, from Australia being designated as the Bug of the Month on our site in February 2007.  According to the Australian Museum:  “Female Fiddler Beetles lay their eggs in rotting logs or in the damp soil under logs. The grubs feed on rotting timber and build cocoons of soil and debris in which they pupate.”  According to Museums Victoria:  “The adult beetles emerge in early summer. They are strong fliers and fly between eucalypt and other trees to feed on nectar. They are found in all states except for Western Australia and are harmless to humans.”  According to Climate Watch:  “It buzzes loudly while flying.”  The markings on the Fiddler Beetle can be green or yellow.

Spotted Flower Chafer from Australia
Tagged with → bug of the month • WTB? Down Under
Location: Canberra, Australia