Bug of the Month February 2016: Hacklemesh Weaver takes a walk on the snow in Connecticut

Subject: Snowy recluse?
Location: Stratford, Connecticut
January 30, 2016 7:48 pm
I snapped this picture while dog walking last week. I was surprised to see a spider crawling across the snow. Is it a brown recluse?
Signature: Karen 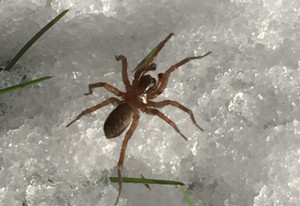 Hacklemesh Weaver in the Snow

Dear Karen,
We are going to go out on a limb and say that this Spider walking on the snow is an unusual sighting.  The pronounced pedipalps indicate your spider is a male and the large mandibles made our identification relatively easy.  The Spiders of Connecticut site has a good image of a male Hacklemesh Weaver, Amaurobius feros, that looks like a very close match to your spider.  The site states:  “Native to Europe, it has become established in southeastern Canada and the eastern U.S., though is not limited to those regions. This robust spider is common in and around homes, but also lives under rocks, logs, in leaf litter, and other dark, humid places. Adult males are notorious for wandering in the spring.”  BugGuide also has a good matching image and the information page on BugGuide provides the common name Black Lace Weaver and states:  “A synanthropic species; found associated with humans and man-made structures.”  Spiders.Us provides this life cycle information:  “For this nocturnal spider, mating seems to take place mostly in the spring, but sometimes also in the fall. However, because this species seems to have a lifespan of 2 years or more, it is possible to find sexually mature specimens year-round, so mating may take place at any time really. Egg laying seems to happen mainly in the early summer. The female deposits eggs into a lens-shaped, silken sac about 7-15mm in diameter. Each sac can have anywhere from 60-180 individual eggs inside and it takes about 3-4 weeks before the spiderlings emerge. She stands guard over them that entire time.  Interestingly, this species is matriphagous, which means the mother sacrifices herself as food for her spiderlings. This happens a day or two after their first molt, which is roughly one week from their emergence from the egg sac. This species is considered ‘subsocial’ because, after cannibalizing their mother, the spiderlings remain together and feed communally for about a month. They overwinter in their immature stage, and most overwinter once again in their adult form.”  Our favorite bit of trivia also comes from Spiders.Us:  “Cloudsley-Thompson (1955) mentions that, in England, Amaurobius ferox is sometimes called the ‘Old Churchman’ because it can be seen scurrying around on the walls and pews of old churches before rain storms.”

Awesome Daniel!  Thanks for the ID and the info about him.  I’ve been a fan of the site for many years and this is my first “bug of the month”, very cool!  Happy (early) spring!
Karen in CT

BUG OF THE MONTH March 2010: Snowfly and a Snow Flea