Subject: Whats that bug! Spider!
Location: Las Vegas, Nevada
September 13, 2014 6:22 pm
I found the super cool spider that I have never seen before in Southern Nevada! Could you help me identify it?
Signature: Thanks bunches! Victoria Rebholz 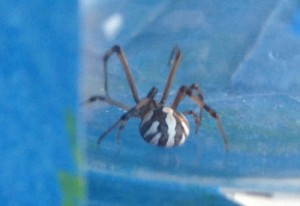 Hi Victoria,
This is an immature Western Black Widow, Latrodectus hesperus, and you can compare your image to this image posted to BugGuide.  According to BugGuide:  “Caution: Anyone bitten by a western black widow spider should receive prompt and proper medical treatment. While the black widow is considered the most venomous spider in North America, death from a black widow spider bite is highly unlikely.  For the most part, the black widow’s bite may be felt only as a pin prick, during which the spider’s fangs inject a minute amount of highly toxic venom under the skin. The severity of the victim’s reaction depends on his or her age and health, and on the area of the body that is bitten. Local swelling and redness at the site may be followed in one to three hours by intense spasmodic pain, which can travel throughout the affected limbs and body, settling in the abdomen and back (intense abdominal cramping, described as similar to appendicitis), and can last 48 hours or longer. Elderly patients or young children run a higher risk of severe reactions, but it is rare for bites to result in death; only sixty-three having been reported in the United States between 1950 and 1959 (Miller, 1992). Other symptoms can include nausea and profuse perspiration. If left untreated, tremors, convulsions and unconsciousness may result. When death does occur, it is due to suffocation.“