Subject: Huge Beetle Found! Invasive or Not?
Location: Eastern United States, DE
July 22, 2014 11:06 pm
Hello! I’ve got a bug on my hands – well, in a jar – and I don’t know what to do with it.
I have lived in this area for 20+ years and am an avid outdoorswoman. This critter was trying to get into my house through the window screen, and I’d like some expert help figuring out just what it is. Because I’ve never, ever seen it before.
This beetle is large, nearly two inches long, with a slender body about half an inch wide. It’s a rusty reddish brown color, with black mandibles and antennae about an inch long. There are no discernible markings.
I’ve confirmed that it is not a cockroach of any variety, and if it didn’t have terrifying looking mandibles I’d be picking it up to take better photos.
I’d like to know if it’s a type of boring beetle or not, so I can know if it’s invasive or not. I’ve never seen it before and it’s rather concerning to see something this…enormous on my window trying to nibble the screen.
Any info pointing me in the right direction would be awesome. 🙂
Signature: ~ Kat of the Coast 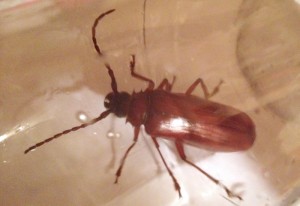 Dear Kat of the Coast,
Root Borers in the family Prioninae are quite impressive beetles and there are several native species found in Delaware, even if they have managed to avoid detection by you in the past.  This is a Brown Prionid, Orthosoma brunneum, and you are wise to avoid its mandibles.  The grubs of Root Borers live feeding on wood for several years and the mandibles of the adults need to be strong enough to chew their way to the surface once metamorphosis is complete.  We suspect this individual was attracted to light, and that is why you discovered it on your screen.  See BugGuide for additional information on the Brown Prionid.  We would urge you to release your captive Brown Prionid.

Longhorned Borer collected in 1984 is not native to North America!!!