what is it
I was just looking thru your site to try and identify this beetle I found tonight. It looks like the California long horn beetle. But I am in NH on vacation. Should I not release this insect. Is it not native to this area. I am sending the picture I took, but not very good since the beetle is in a vile for safe keeping until I hear that it is safe to release it. 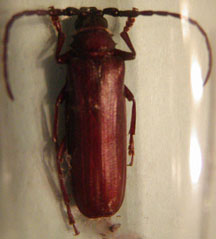 We must confess that we were sure you had one of the Long-Horned Borer Beetles, but we were unsure of the genus and species. We asked Eric Eaton to try to clarify some identification points for us, which he did. However, in identifying your beetle, we now have an entirely new genus to consider. Here is Eric’s response: “This appears to be a female Orthosoma brunneum, the Brown Prionid. Just what you needed, eh, another critter to get confused by:-) Ergates are large, western mountains mostly, with FINE teeth on the edge thorax. Derobrachus are HUGE, almost exclusively southwestern (though range throughout the souther tier of states I am told). Prionus usually tend to be very squat, males with very thick antennae (almost comb-like or dentate in some species). An overall more robust critter than the others. Orthosoma is the most slender of all, and always a bright brown in color. Hope that helps, but getting Doug Yanega’s book on northeast longhorns would be your best bet (less than $20). Eric “