Subject: roach?
Location: Portland, Oregon 97266
December 30, 2012 5:06 pm
Hi! I’ve had 4 of these in my room, and found a couple dead downstairs. Looking through your site I *think* it’s some kind of roach.
The bugs seem to be attracted to light, both natural and lamps (I found the first two in my lamp, and the other two were on or around the window on a sunny day. They fly, but not very quickly.
Should I be worried about them harming my home or myself?
Thank you for your time, and your site! I’ve used it several times to ID bugs since I moved to Oregon from Minnesota!
Signature: Lynnette Carlson 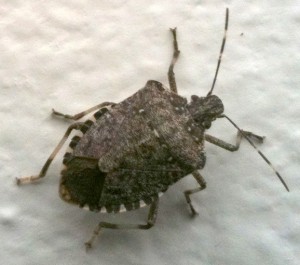 Dear Lynnette,
This is a Brown Marmorated Stink Bug, Halyomorpha halys, and we just learned on BugGuide that it also has two other common names:  Interstate Bug and Asian Stink Bug.  This is an introduced species that does not have any natural predators in North America, so it is increasing in numbers and expanding its range unchecked.  Brown Marmorated Stink Bugs frequently enter homes as the weather cools so that they can escape harsh temperatures and hibernate until spring.  We suspect that you are finding individuals that have entered you home to escape winter conditions.  They will not harm you or your home, though they are a nuisance.  Additionally, their increasing numbers might be contributing to the decline of native species that compete for food and habitat.