Subject: What kind of bug is this?
Location: Northern Illinois
December 30, 2015 11:00 pm
I have been seeing these bugs in my house for about the past month. It is December and I live in the northern part of Illinois. I want to identify the bug before I contact my landlord so any help you can give me would be appreciated.
Signature: Kimberly 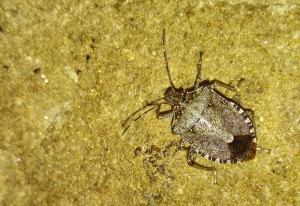 Dear Kimberly,
While they are not dangerous to humans, pets or furnishings, the Brown Marmorated Stink Bug can be quite a nuisance when they enter homes as the weather cools so that they can hibernate.  This is an invasive, exotic species that was first discovered near Allentown, Pennsylvania in 1998, according to BugGuide.  This non-native species from China is a general feeder, and according to BugGuide:  “Damage reported in the US to apples, pears, peaches, cherries, corn, tomatoes, peppers, soybean, ornamentals…” and “Highly polyphagous, reported on ~300 plant spp. in its native range; feeds mostly on fruit, but also on leaves, stems, petioles, flowers, and seeds. Damage typically confined to the fruiting structures.”