Subject: Wingless wasp?
Location: Austin, Texas, USA
October 27, 2012 7:21 pm
Hello
I saw this insect working its way up a cedar tree outside the job. Thought it was an ant at first yet it appears to have some type of wing structure on its back. Not sure what it is. My guess would be a wingless wasp. It resembles a velvet ant minus the velvet. Feel free to post if you find this insect interesting.
Thanks
-Calvin
Signature: Calvin 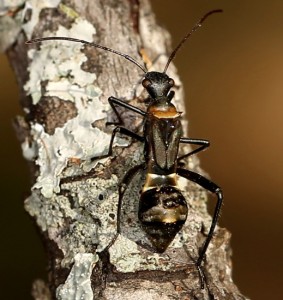 One Response to Broad Headed Bug