Red Bug
Location: Ann Arbor, MI
June 26, 2011 7:19 pm
The bugs have been crawling around our front walk along a garden filled with vinca ground cover. Some move very quickly, scampering across the concrete bricks, while others gather in clumps. They have been around for more than a week, and I can see that they have about doubled in size.
The start out as a bright red-orange in leg and body color, gradually developing the darker body and legs It looks as if they are developing wings, and I am guessing that the red bumps on the head are eyes. From head to tail, they measure between 1/4” and 1/2”, at least so far.
I’d like to know what they are and whether they are beneficial or harmful to my garden and house.
Signature: lloyd 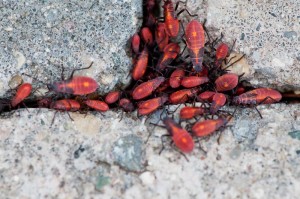 Hi Llyod,
We already responded to three previous requests from today for Boxelder Bug Nymph identifications, and with your letter, we decided we needed to post a letter with photos.  Coincidentally, your photos were also the best.  Boxelder Bugs will not harm your home or garden, though they do feed upon the seeds of boxelder and other maples.  They are more of a nuisance than a problem, especially when they are extremely numerous.  They also seek shelter indoors when the weather begins to cool. 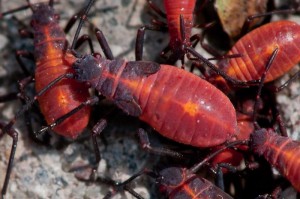