Subject: Giant Fly
Location: Denver, Colorado
July 7, 2012 12:21 pm
Found this thing outside on the patio, it’s wings were incredibly small/shriveled when we found it, but have grown a lot by now. What in the world is it?! Looks like some kind of giant fly…but could it be a horse fly? The eyes aren’t together so it doesn’t seem like it. Thanks!
Signature: Thanks! 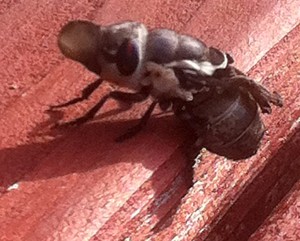 Your insect is a freshly metamorphosed Bot Fly in the genus Cuterebra.  Both the wrinkled wings and the protrusion on the face indicate the recent eclosion.  Jeff Boettner provided this information for a recent posting:  “The one you photographed is very freshly emerged, the wierd face is from a balloon like structure that inflates to help push the fly out of the pupal case, and then it gets reabsorbed back into the face.”  We will copy Jeff on this response to see if he is able to provide any additional information.

Jeff Boettner responds
Hi Daniel and Tyler,
Your bot looks like Cuterebra lepusculi, a rabbit botfly. They are a little tricky to ID until they have been alive for a day or two, yours is freshly emerged. If you keep it around for a few days the face will be helpful to see as well as the pattern on the hind end. Bots do not feed as adults, so are easy to hang onto them, although they only live for about 10 days. Their goal is to find a mate and then infect rabbits.
I am doing dna work on reworking the botflies, and would love to get this as a specimen, if you are willing to part with it? We are working on a National Science Foundation grant proposal, and rabbit bots are difficult to get. I would put the specimen in the Smithsonian collection when I am done with it. We use part of one leg for dna work, which we fresh freeze to -80C until we do the sequencing. We hope to look at the evolution of botflies and their hosts. This work will also go toward making a better field key to better help identify bots.
I am happy to cover your shipping costs. Can be shipped live or dead in a pill bottle, if dead add some tissue to bottom and top to prevent bot from moving a lot in shipment.
My address
Jeff Boettner
Plant, Soil and Insect Sciences
Room 115 Ag. Eng. Bld.
250 Natural Resources Road
UMASS-Amherst
Amherst, MA 01003
[email protected]

Nice post. Daniel does a great job with whatsthatbug! I learn a lot from the site. Keep up the great work.
Sincerely,
Jeff

Update from Jeff Boettner
July 17, 2012
Hi Tyler (cc’ing Daniel)
Just to let you know the bot arrived in excellent condition. It is a female Cuterebra lepusculi for sure, which is a rabbit bot. It uses cottontail rabbits as a host, (mostly Sylvilagus audubonii and Sylvilagus nuttallii as hosts in your area).
Thanks so much for sharing it. I will freeze a leg and use it for our next dna run. A tough one for me to find. Will add the bot to our collection which will head to the Smithsonian collection eventually.
Tyler I will drop a check to you to cover your postage and time.
Daniel, I just did a donation to whatsthatbug too, for calling this (and other bots) to my attention. A huge help for our study. Keep up the great web site.
Thanks to you both. Keep on hunting and id’ing
Note: They just killed off our Plant, Soil and Insect Sciences Dept. So I am now officially in Dept. of Environmental Conservation. We HAD the oldest Ent Dept in the country. Otherwise I have the same address and email for now.
Jeff Boettner
Dept of Environmental Conservation

Hi Jeff,
We are horrified to learn that the oldest entomology department in the country is now defunct, and it doesn’t seem like a timely move since there appears to be more and more interest in insects since we began writing this online column back in 1999 on the now defunct American Homebody website after the zine American Homebody went online.  That was very kind of you to make a donation to WTB?  We will continue to notify you whenever a Bot Fly is submitted for posting or identification.  What is the peak season for Bot Flies.  We can make a nice featured posting at that time recommending people to send you specimens or at least to contact you.

Another Update from Jeff
Hi Daniel,
Bots are very random and hard to predict. Generally the bulk of bot reports come in starting with some western bots in April to bots from all over in July-August, then back to western bots in Sept-Oct. So I think it would be hard to time a write up. Luckily these guys are big so they tend to draw attention. And rabbit bots with their red eyes tend to get over reported, in spite of the fact that- in the wild- they are quite hard to find. So really neat to see what turns up on your site and BugGuide. Between the two of you, I have seen about 1/3 of all the bots show up, including the really rare C. mirabilis ( the male has still never been seen, and the female on BugGuide is only the 3rd specimen known in the world), and C. bajensis (which I got a specimen via BugGuide) and only known from about 15 specimens in the world. I got a specimen and dna from the second one, the first one above I flew out to New Mexico to talk to the family that found it –it had been buried in their yard by their kid- with a flower funeral- I would have put it in the Smithsonian :). We found the host rabbits in the area and I hope to work with a couple of rabbit biologists to try to find bots to rear out a male so it can be described in the near future. So I am having fun with even the random bots that show up.
I am thinking about doing a write up for American Entomologist telling about the value of both your site and BugGuide. I have had a ton of fun stories about doing this quest for bots. Last year I had an 8 year old post a male C. lepusculi (the same species of rabbit bot you just got me) from Texas. He just started collecting insects and didn’t want to part with it. I negotiated a deal with his dad to get him some BioQuip equipment in exchange for the bot. A few days later a 7 year old found the female also in Texas. So I did the same deal. Turned out the kids lived about 8 miles apart so I connected them so they could go collecting together. Fun. That bot is pretty tricky to find in the wild, I have never seen this species in the wild, but now have 3 for our work thanks to you guys. We sequenced the dna from the first two bots from TX and this was used in part of a proposal we wrote to the National Science Foundation to try to get funding to do more extensive dna work. We made the first cut, and now are trying to write a full proposal (due in August). It may take us a few years to pull off a working grant, but this would allow us to do 454 sequencing (which is current state of the art), but costs about $400 a fly to run. But each fly we can do will get us a bit closer to understanding both fly and mammal evolution. So cross your fingers!
So for now, this is working great for me. Bots are very hard to set out to look for them. Although I have thought about taking out an add in New Mexico newspapers (like a wanted poster) to try to have people watch for C. mirabilis in and around Albuquerque, NM during the middle two weeks of Sept. All three known specimens showed up within about 30 miles of this area during that time. I have spent about 10 days hunting for it so far. Keeps me off the streets.
Thanks for your concern about the Dept. We will still have some entomologists shifting to the Stockbridge School of Agric (within UMASS). But was a big surprise to all of us that they would break up PSIS. (they merged entomology and plant and soil sciences about a decade ago to try to save ent, but now have pretty much killed it off with this move). The current profs will stil be around, but the plan is to not rehire when this batch retires, and about 1/2 are already within a few years of retirement age. So not looking good.
I agree, it is crazy given we are seeing about 3 new insect species every year in Massachusetts alone. And soon no one to work on them. And meanwhile emerald ash borer is now about 30 miles from our MA border, and Sirex wood wasp is also in NY…crazy to name a few.
Jeff