Walking cricket wasp????
We found this bug in the Dallas, TX area on July 20, 2007 in the evening just before dusk. It was in the bed of our pickup so it must be able to fly. We tried finding pictures and using the guided identification links on the web, but can’t find anything. We left it in a bottle overnight and were surprised to find it fine in the morning. It has a hard exoskeleton, the markings of a wasp, and the legs of a cricket. The black covering on the back appears to be a set of wings, but we couldn’t tell. It did not act aggressive or defensive. We let it go after we took the pictures, and it crawled away with the same movements of a walking cricket. So what do you think? By the way, we love your web site and use it for scouts and for my 7 year old son, who claims to have a goal of moving to Costa Rica and becoming an entomologist. Thanks,
Eddie Schutter
Dallas , TX 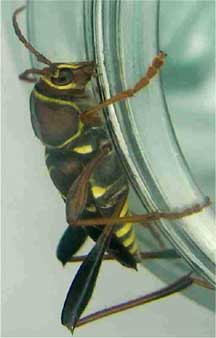 Hi Eddie,
This is a wasp mimic Borer Beetle in either the genus Clytus or Neoclytus. We are inclined to favor Clytus, but we will seek additional assistance from Eric Eaton to try to get a proper identification. Here is Eric’s response: “Daniel: The beetle is a Neoclytus, probably N. mucronatus, as those spines on the tip of the hind tibia are, I think, peculiar to that species. I have seen them swarming over branches broken off trees by storms. Great job just getting the beetle down to two genera! Eric”.

(07/25/2007) Cerambycid
Hi Guys:
The cerambycid from Dallas, TX is Neoclytus mucronatus. It breeds in various species in the Elm family.
ian