Caterpillar Hunter in Los Angeles: Will this year see a significant rise in sightings????? Owlet Moth Caterpillar we believe

Subject: Stink Bug?
Location: Raymond, GA
March 17, 2015 11:13 am
I found this bug in the woods, and when I went to take a picture of it, it was partially obscured by leaves. I used a stick to brush the leaves away for a better view. When I did this is “popped” and released some sort of white cloud. After it did that, it scrunched up into a ball, and I was afraid I had accidentally hurt it. I used a leaf to transfer it to a piece of wood, and lo and behold, it sprang up and darted off! While I was relieved, i was wondering what caused it to make that popping noise. I thought maybe a “Stink Bug” of some sort, but couldn’t find any pictures of one that looked similar online, nor, now that I think about it, was there any unpleasant smell. I thought the red coloration was very pretty, but I’m sure other insects take it as a warning. Any idea what this little guy is?
Signature: Caleb

Update:  March 19, 2015
Hey, I sent in a letter under the title “Stink Bug?” After doing some research, I think I identified it as the Bombardier beetle (Brachinus species). However, when I looked on your site, all I could find was the False Bombardier beetle. I’m not sure if I misidentified this. 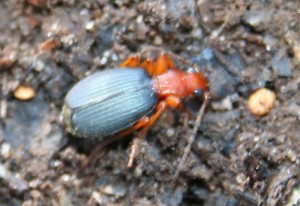 Dear Caleb,
We are so excited you wrote back to us, which prompted us to locate your original email.  This was an especially hectic week for our tiny editorial staff and we missed your original submission.  We are positively thrilled to be able to include your images of a Bombardier Beetle on our site because as you have observed, we only have images of False Bombardier Beetles, also members of the Ground Beetle family Carabidae, but in a different genus and recognizable by the black, not red head.  We are also thrilled with the written observations you provided.  The popping sound you heard is explained on BugGuide:  “Adults have chemical defenses, ejecting toxic, foul-smelling gases from their abdomen with a loud popping sound. The explosive brew is composed of hydrogen peroxide, hydroquinone, and catalytic enzymes.”  Wired has a wonderful article on Bombardier Beetles which incudes:  “There are hundreds of species of bombardier beetles all over the world, with various defensive mechanisms. Some have non-explosive, foamy excretions of chemicals, while others like the African bombardier beetle can actually aim their explosive spray in virtually any direction like an angry lawn sprinkler.” 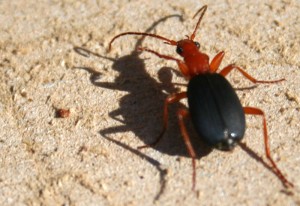