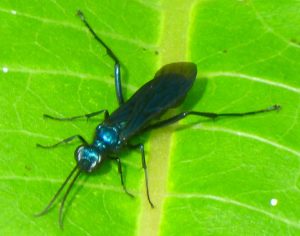 Dear Rob,
This beauty is a Thread-Waist Wasp in the family Sphecidae that is commonly called a Blue Mud Wasp or Blue Mud Dauber, Chalybion californicum.  According to BugGuide:  “Females construct mud nests in sheltered areas, often under the eaves of buildings, and provision them with spiders. Sometimes refurbishes the nests of other mud-daubers, such as Sceliphron.”