Subject: Beetle Identification
Location: Toronto, Ontario, CA
December 26, 2012 12:33 pm
Hello, I found a beetle on a Goldenrod plant on the flower in late Summer. I have tried identifying it myself, but it was not in my two insect field guides, nor was it in the internet. It’s head and abdomen looked similar to Blister Beetles and Oil Beetles, so I did some researching on them. Nothing the same. The closest one was the Margined Blister Beetle, but instead of lines on the perimeter of the elytra, there were blotches on the top instead. After all the researching with no results, I began to think it was a new species of insect. The beetle was approximately two centimeters in length. I found it in Etobicoke, Toronto. The Goldenrod it was found on was just outside a small dirt trail in a large field with small shrubs and almost no trees where few people walk. That day, there were hundreds of Locust Borers out on the Goldenrods as well. Please help, for I have been looking for this beetle’s identity for 5 months now. Thank you!!
Signature: Isaac R. 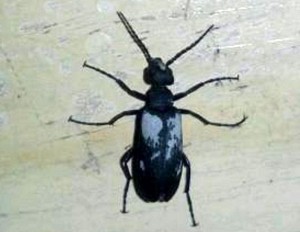 Dear Isaac,
Thank you for sending a larger resolution image.  That 9K file was very tiny.  We agree that this is a Blister Beetle, and while we cannot provide you with a species, we believe you were very close with the Margined Blister Beetle guess.  It is our opinion that this Blister Beetle, which may have coloration that is an anomaly, is also in the genus Epicauta.  You can see many species represented on BugGuide that look very similar to your beetle.