big moth
Location: San Pedro California
September 28, 2011 9:23 pm
This big moth, or whatever it is was found in the eaves om my neighbors house. I would guess it’s about 6 inches wing tip to wing tip.
Signature: Delbert Crawford 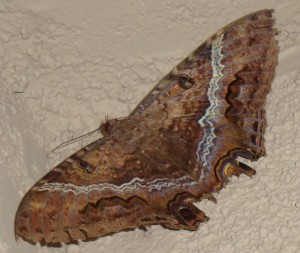 Hi Delbert,
Your moth is a Black Witch, a common species in Mexico and Central America.  As early as the late 19th Century, there were reports of Black Witches making northern migrations in the fall, and they are sometimes found as far north as Canada.  In recent years, Black Witches have naturalized in the states closest to the Mexican border.  Perhaps global warming is contributing to the northern range expansion.  The white diagonal bars on the wings indicates that your specimen is a female Black Witch.

Black Witch sucking on a Peach