Subject: Caterpillars
Location: Omaha Nebraska
July 21, 2013 2:34 pm
I wrote yesterday about the black colored swallowtail a while ago that visited my parsley. Today I am noticing a few of these little guys munching it. I didn’t think it would be the offspring of that butterfly considering it didn’t stay for more than a moment. I don’t mind too much, as we don’t use very much of the parsley, but I would like to know what it is going to be and what else it usually munches. I have already had cabbage loopers that I had to remove from my broccoli, but unlike those, these are very brightly colored and still very tiny. They’re near where my fingers are in the image, I couldn’t get my camera to focus on them any closer.
Signature: lyredragon 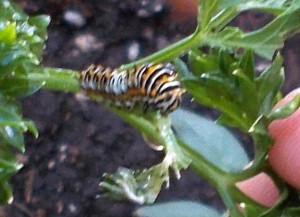 Dear lyredragon,
We wrote back to you about your Black Swallowtail, Papilio polyxenes, and that the larval food plants are in the umbel family including Parsley and that the female Black Swallowtail in your photo was in the act of ovipositing.  These two guys/gals are of slightly different (we believe a single instar difference) ages, and we are speculating that the female you photographed ovipositing in this plant may visit the plant on a regular basis to deposit a single egg a day to ensure that at least one of her offspring will be able to survive on your verdant pasture of a parsley plant.  We have to call your caterpillars Parsley Worms which is cited on BugGuide.  They will change color and markings as they molt and grow. 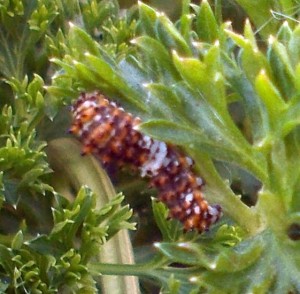 July 23, 2013 7:37 pm
http://youtu.be/Rgqi1PaWTEc
Just keeping you all abreast of the caterpillar growth. This is a youtube video of my parsley worms that I took tonight (July 23, 2013) they were being really active. I was watching them cast their frass with their mandibles, chew on the leaves, they were even eating smaller instars, I think, either that, or cleaning up their old skin castoffs. I tried to get a picture of them doing that, but it had eaten it until it was not recognizable by the time I got back. They’re very quick about eating
Signature: lyredragon

Dear lyredragon,
Thank you for the update.

5 Responses to Parsley Worms on Parsley