Longhorn beetles on Agave
Yo, Bugman!
I sent this earlier, but am not sure it made it where it was trying to go. Anyhoo, I snapped this image a few weeks ago in the western foothills of the Galiuro Mountains of s. Arizona. I was shooting blooming Agave chrysantha and noticed what I thought at the time were tarantula hawks on the undersides of some of the flower umbels. I didn’t realize until I had the image blown up on my desktop that they were longhorn beetles. Given the location, any idea as to species? They seem to be chewing on the pedicels right at the flowers, maybe for the very sugar-loaded sap? Thanks!
Dan Wolgast
Aravaipa Canyon, AZ 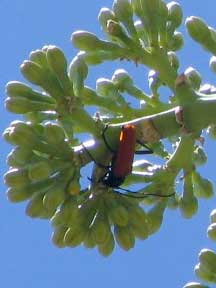 Hi Dan,
This sure looks like a Black and Orange Longhorn, Tragidion coquus, or perhaps Tragidion armatum. According to Eric Eaton on BugGuide: “I understand that this genus, Tragidion, are mimics of tarantula hawk wasps.”