Subject: Stabby the Bug
Location: San Francisco, CA
August 3, 2014 5:57 pm
My wife felt something biting her in bed and caught this guy red- proboscis-ed. We live in San Francisco, California (west Side, nearish the ocean). The bug is about 3-4mm and has a long proboscis which is why I named it “Stabby rather than “Bitey”. I can tell that it is not a bed bug and my best guess is a true bug maybe related to a minute pirate bug. These are known to stab people when their usual preferred prey is not around…but the head shape and the coloration look wrong to me. Thanks in advance!
I apologize in advance if this is a repeat but I realized I never actually verified the last one went through (which may not be something the site does, so sorry for that, too)
Signature: Hernan 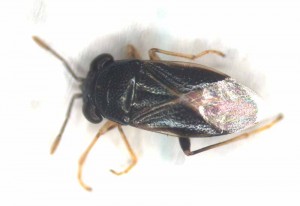 Dear Hernan,
We find your letter terribly entertaining.  The first thought in our mind when we looked at the images was “my what big eyes you have”, and sure enough, our research on BugGuide revealed that this is a Big Eyed Bug in the genus Geocoris.  According to BugGuide the habitat is  “On ground between clumps of weeds and sparse grass, especially in sandy places, in woods and near streams” and they are “generalist predators of small arthropods.”  BugGuide also notes:  “Big-eyed bugs are among the most abundant and important predaceous insects in many crops in the US.”  Based on that information, it seems highly possible that the individual that bit your wife came in from the outdoors.  As far as the bite is concerned, we are attempting to research other information on bites to humans, and we are relatively certain your wife was not mistaken for a small arthropod.  Additional information is available on Featured Creatures and the Cornell University Biological Control site.  It is sad, but it seems that whenever we write about the possibility of a beneficial insect biting or stinging a person, paranoid individuals attribute horrible reactions to the situation, much like the recent spate of comments we have received regarding the bites from Lacewings.  We like to maintain an open dialog and an interactive site, and we refrain from editing comments, but quite frankly, the internet has become the refuge of paranoid kooks who are trying to protect themselves, their children and their pets from every perceived threat in the world.  Thanks again for your wonderful submission with its excellent images.  It isn’t hard to imagine “Stabby” jabbing that impressive proboscis into tender flesh, but we maintain that is a rarity, and countless millions of encounters between people and Big Eyed Bugs go unnoticed. 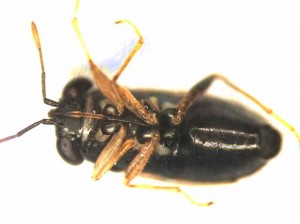 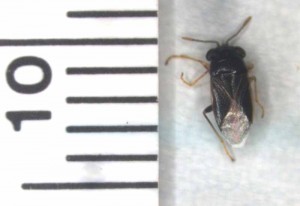