Subject: Isopod?
Location: Kejimkujik National Park, Nova Scotia Canada
August 6, 2012 8:58 am
Hi there – this looks like some sort of isopod, but I’ve not been able to find anything more specific. Perhaps it’s some sort of insect nymph instead? It’s maybe 1/2” long.
It was spotted in Kejimkujik National Park, Nova Scotia Canada in August.
Signature: Jim 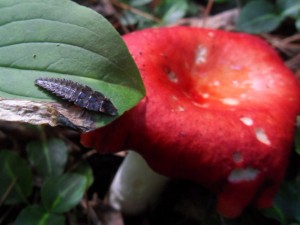 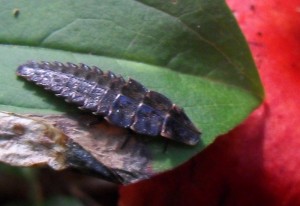 Thanks Daniel!  You may see that I had resubmitted my photo with a follow up question about whether it was a firefly larva, and it was in part because I also saw that same blog post.
I hadn’t considered the net winged beetle possibility.  I certainly do see beetles of approximately this type here in NS.  Even the adults look pretty similar to fireflies, don’t they?
Anyway, mystery (mostly) solved.
Thanks!
Incidentally, have there been any reports of a lack of fireflies across the continent this year, as with bees, and as with cicadas in some years?  I haven’t seen any fireflies at all in Nova Scotia this summer.