A Mysterious Scarab Beetle
Hello, my name is Sandy and I am an insect enthusiast from British Columbia, Canada. I have written to your site (which is doing a wonderful service to the public) because I have failed to identify a particular scarab beetle specimen I have found. It and 2 others were collected on the flowers of a fire weed plant outside of Thunder Bay, Ont. in the summer of 2004. The actual size of the specimen in the photograph is roughly 1 cm. Hopefully the enlargement and the given information will aid you in an identification. Many thanks, I anxiously await your findings.
Sandy 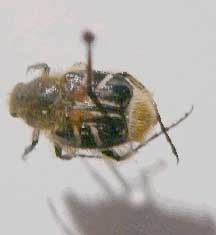 Hi Sandy,
We wrote to Eric Eaton who is a specialist in beetles and he wrote back to us: “This is a species of [genus] Trichiotinus. They are difficult to ID to species without a key. Good mimics of bees, though.” Our beetle guide says they commonly occur on flowers during the day and readily take flight when disturbed.