Subject: A Fly Or A Bee?
Location: Torrance, California
July 24, 2014 9:49 am
Dear Bugman,
By the end of June of this year, we found a couple of these insects in our front yard. The bigger one was about one inch long. We live in Torrance, California, and have never seen them before. Could you help us to identify them?
Thanks.
Signature: Daniel. 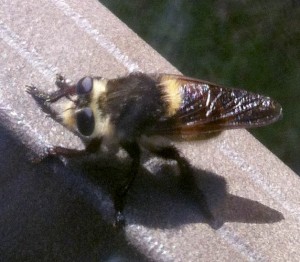 Dear Daniel,
This Robber Fly in the genus Mallophora goes by the collective general name of Bee Killer.  Your particular Bee Killer is Mallophora fautrix, a species with no specific common name, but according to BugGuide, it is:  “The only one of its genus in California.”  As you can see from the images in our links, Bee Killers prey on large flying insects other than Bees, and it is a rare, top of the insect food chain predator that preys upon adult, stinging wasps.  Though you are not the discoverer of a new species, you can spearhead a campaign to nominate the only Bee Killer in California as the California Bee Killer, even though its range extends beyond our fair state.