A bee, perhaps?
Location: Upper Styria, Austria
June 30, 2011 6:55 am
Dear Bugman, I came across this eyecatching creature June 9 along the Enns River between Wörschach and Niederhofen, Austria. The weather was overcast and cold, hovering right around 60˚F, but I had the feeling that if it had been warmer, this little fella would have been buzzing from flower to flower. Do you have an identification for it? Thanks in advance!
Signature: N. Fritz 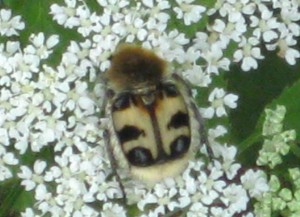 Dear N. Fritz,
We believe we have correctly identified this Scarab Beetle as a Bee Chafer, Trichius rosaceus or Trichius fasciatus, based on Rob Coleman’s photos on ISpot.  The Global Species website has some very similar photos.  The harmless Bee Chafer probably derives some benefit from mimicking a stinging bee.

Thanks, Daniel!  Is it the first bee chafer to be featured on What’s that Bug?  If so, I’m very honored!  Condolences on Lefty, but I’m glad to hear his legacy will live on.

Thanks.  We do not turn up any matches on our site for Trichius, so this is probably a genus first on our site, however we do have some similar North American species.

Stag Beetle and Grapevine Beetle by a Structuralist Insect Photographer