southeast Arizona, bees
The bees in the attached photos were observed this morning (late September) at Whitewater Draw in extreme southeast Arizona. They were extremely numerous (perhaps in the 100s), and spent their entire time buzzing low over the sandy bare ground, occasionally dropping to enter small holes, occasionally coming together into roiling balls of bees such as those in the images. The animals were dusty gray, quite fuzzy in appearance, each about 1 cm long. Several other species of hymenopterans, including velvet ants and other bees, were also present. Can you tell us what these bees are and what on earth they were doing? Many thanks,
Rick Wright
Editor, Winging It
Department Editor, Birding 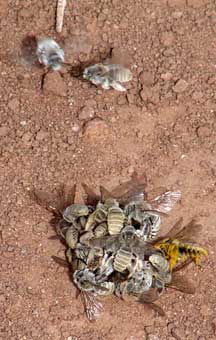 Hi Rick,
We suspect these are some species of Mining Bee in the family Andrenidae, and perhaps their Bee Ball has something to do with mating. We will check with Eric Eaton to get his input. Here is what Eric had to say: “The bees visible in that image are all males, vying for th opportunity to mate with a female that has yet to emerge from a burrow. Virgins are a hot commodity in the animal kingdom:-) I am not sure of the species or genus. If this image was taken in the spring, I’d say Centris pallida. “