Subject: Ginormous Yellow Jacket/Wasp/Spawn of Satan
Location: Suburbs of Cleveland, OH; near the Cuyahoga Valley National Park
August 12, 2015 5:46 am
Dear Bugman,
I hope this message finds you well. Every Spring, I find a few of these monstrosities in my house, and they kinda creep me out. This year, as usual, they were buzzing around my windows, trying to escape into the outside world, where they can then eat children and small pets, but I’ve also found them outside my house this Summer. Recently, I found two engaged in a duel to the death on my driveway, then, last night, I heard what I thought was a helicopter landing in my front yard, but it turned out to be another one of these big sumbitches buzzing around my porch light. Finally, this morning, I saw what I assumed was a hummingbird, but it was actually another one of these big jerks, which landed briefly on my driveway, picked something up, then scurried off to a nearby oak tree. Any chance you can please tell me what they are, and whether or not I should just burn my house down to get rid of them? Alive, they are about 2″ long, but shrink to about an inch after an entire can of wasp/hornet spray has been deployed against them. Thanks for your help!
Signature: Kenneth F Mucha II 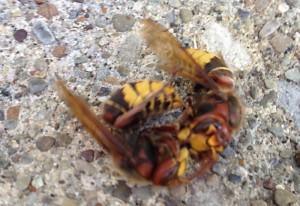 Dear Kenneth,
These are European Hornets, Vespa crabro, an Invasive Exotic species that according to BugGuide was introduced to eastern North America in the nineteenth century.  These are top of the food chain insect predators that are able to dispatch much larger native predators including Dragonflies.  According to BugGuide:  “Paper nest is built in hollow trees, or in human structures such as attics. Adults come to lights.”  We cannot recall any reports of people being stung by European Hornets, but we imagine they will defend the nest and we also imagine the sting could be quite painful.  We believe your images document battling Queen European Hornets, perhaps fighting over prime real estate for nest construction.