Subject: What are these bugs and do we need to remove them??
Location: Southern Louisiana
August 2, 2014 3:33 pm
Hi! my husband was working on the trees in our yard and found these bugs on one of our crepe myrtles and on a live oak tree. Both trees are on the north side of the house. The other crepe myrtle, on the southern side, and the two nuttal oaks, in the front yard, do not seem to have these bugs (at least not that we’ve found).
They are in clusters and from a distance look like black patches on the bark. I’ve included two pics, one is a close up shot the other is a bit farther away. The ones I saw were moving and they moved together.
Hope you can help!
Signature: Mandy 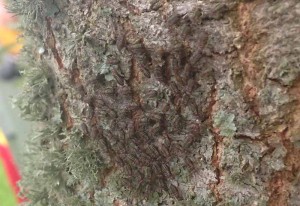 Dear Mandy,
Though they look highly problematic, these Barklice or Tree Cattle in the genus Cerastipsocus, and most likely Cerastipsocus venosus, are harmless, benign insects that feed upon lichens.  From the look of your image, there is an ample food source for them on the trunk of the tree.  We are highly intrigued by your comment that they “were moving and they moved together” because they indicates they move like a herd.  We cannot recall having researched the origin of the common name Tree Cattle, and that seems like a very good rationale for the name.  According to Michigan State University Extension:  “Tree cattle, Cerastipsocus venosus (Psocoptera: Psocidae) are large barklice and get their common name from their habit of forming large colonies that move about in unison (much like a herd of cattle, I guess). Tree cattle are harmless and no cause for concern.  According to University of Florida Horticulture:  “Suring some years they make extensive silken webs that often cover the trunks and branches of live oaks in the southeastern U.S.  The webs are believed to protect the barklice from predators.  To some, the glistening webs are unsightly, but neither the barklice nor the webs will cause any harm to trees.  This is referred to as a NBD, ‘no big deal’ bug.  these insects are scavengers, cleaning the bark of lichens, fungi and dead animal and plant matter.  The adult barklice are brownish-black and approximately 1/4 inch long.  the immature stage or nymphs, are brownish-gray and resemble the adults, except they are wingless.  The adults and nymphs feed in a group.  When the webbing is disturbed they scatter rapidly as a group and are referred to, in the older literature, as tree cattle because of this herding behavior.”  According to the Galveston County Master Gardeners Beneficials in the Garden site:  “The term ‘lice’ as part of the common name of these tree dwellers is quite misleading as these insects are neither parasitic nor louse-like in appearance. Upon being informed of the identification of this insect, the typical response of a gardener is a widening of the eyes and other momentary indications of being aghast! Our Galveston County Extension Horticulture Agent advises us to precede the identification with a notation of  ‘Congratulations, you have beneficial insects in your landscape!’  When disturbed, Cerastipsocus venosus exhibits the fascinating behavior of moving en masse, somewhat like a flock of sheep or herd of cattle. They may also temporarily scatter when suddenly disturbed, only rejoin again as a “herd.” Not surprisingly, they are also known as “bark cattle” or “tree cattle.” Barklice are most often noticed on smooth-barked shrubs and trees such as crape myrtle and on oaks although they occur on a variety of hardwood ornamental plants (we have seen them on Bradford pear).”