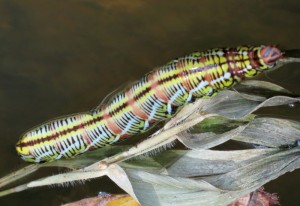 Subject: large caterpillar swimming
Location: Western Kentucky
October 10, 2014 1:33 pm
I had never seen a caterpillar swim before. We were walking along a creek when we saw this large caterpillar “swimming”. It would bend it’s self almost in half to the left, then straighten out, then bend in the opposite direction and straighten out. It propelled it’s self through the water this way. It crawled along a leaf and stick, then set off swimming again for the bank. It was the size of a tobacco horn worm, but much more colorful. I have gone through several pages of your caterpillars and can find nothing close to this one. It was very colorful in the striping, and had a red head, can you tell me what it was, and which one of the large silk moths or sphinx moths it will become? It was seen In Western Kentucky in September of this year (2014)
PS: I have sent this picture and request twice before with no response. I am sending it again as I really want to know what it was.
Signature: Janet Fox

Hi Janet,
First we want to apologize for not responding on your first two attempts.  We really do have a skeleton crew and we do not have the man power to respond to every request.  Even if we did not have gainful employment forcing us to leave our comfortable home office, we still would not be able to effectively respond to all the mail we receive.  Had we known that you had such an exceptional image of a Banded Sphinx Caterpillar to accompany your unusual sighting, you would most certainly have gotten a response on your first attempt.  The Banded Sphinx Caterpillar, Eumorpha fasciatus, is a variably colored and marked caterpillar with this particular bold and colorful pattern being the most memorable.  You can see more images and read more about the life history of the Banded Sphinx on the Sphingidae of the United States site.  The adult Banded Sphinx is a gorgeous moth.  This is the second account we have received of Banded Sphinx Caterpillars found in water.  We wonder if they are subject to parasites that cause them to drown themselves like Potato Bugs have when infected with Horsehair Worms.

Daniel,
Thank you for helping me identify my swimmer.  I thought it would have had to have been a silk moth or sphinx moth due to it’s size.
I had never seen one swim before.  I was so amazed, later I kicked myself for not taking a video of it instead of still shots.
Live and learn.  Next time, if I ever see another one swim, I will video it.
Thanks again.
Janet Fox