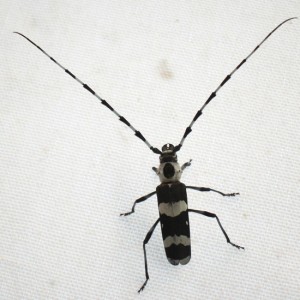 Hi Marion,
While it might not be appropriate for the staff of What’s That Bug? to have favorites, the Banded Alder Borer, Rosalia funebris, in your photograph is probably our favorite North American Beetle.  The Banded Alder Borer is found in the western states from California to Washington, into Canada.  BugGuide also has reports from Idaho and Utah.

Thank you so much for your quick reply.  We are so impressed with this bug. The one you see the photo of is the male.
A few minutes later another larger one appeared, which turned out to be the female.  The smaller one reacted instantly by mating the with larger beetle.  Thank you again.
Marion and Kent

Hi Marion and Kent,
You are such teasers to tell us that information and then not send a photo.  It is also very curious that the female found the male.  It is generally believed that female insects release pheromones and males are attracted to the “scent” of the females by using their more developed antennae.  Sometimes both sexes are attracted to other scents or to food supplies and mating takes place at a jointly attractive location.  Charles Hogue writes in Insects of the Los Angeles Basin:  “Adults may be attracted to the volatilizing esters in fresh paint.”  We hope you took a photo of the mating activity that you can send to us.