Banana Slugs
Sat, Jul 4, 2009 at 7:23 PM
Here are a few pictures of banana slugs. The first picture is of a spotted banana slug…I have no idea why some are spotted and others aren’t, just different species? The second picture shows how big they can get. And in the third picture I was lucky enough to come upon the banana slug as it was devouring a flower petal. One of the weirder things I’ve seen, as it ate it extremely fast- but not the best picture. Enjoy!
katebell
Northern California 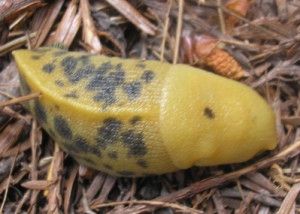 Dear katebell,
Thanks so much for sending in these photos of Banana Slugs, Ariolimax columbianus, in such a timely manner.  According to the Pacific Natural History Projects website:  “The Banana Slug can grow up to 12 inches (26 centimeters) and is the world’s second largest slug.  …  The coloration of the Banana Slug may be a bright yellow, slate-green, or white with or without black spots. ”  Further in the website, it is indicated that:  “During mating season, the slime contains a chemical, which entices other slugs to follow.
Slugs are hermaphroditic which means they have both male and female reproductive organs.   Normally, slugs trade sperm with other slugs, but can fertilize their own eggs.   They may lay 12 to 100 eggs at a time and up to 50 to 150 eggs each year.  The eggs are pearl-like in color and about the size of a person’s pinky fingernail.  The eggs are laid in clusters under logs, rocks, and in the soil.  Eggs are laid in the early spring, late summer and early fall.  Most adults die after laying eggs.  The eggs laid in the late summer or early fall may not hatch until spring.  It takes three to four weeks for the eggs to hatch.
Slugs may feast upon a variety of plants as well as fungi and decomposing vegetative matter.  The slugs use their radula to scrape food off the source.  The slugs may be preyed upon by garter snakes, ducks, geese, shrews, moles, beetles, crows, and salamanders.  Raccoons have a trick to deal with the slime.  They will roll the slug in dirt to coat the slime.
Slugs have a pair of tentacles which they use to gather information about their environment.  The pair of tentacles located on the top of the head has a small black spot at each tip.  These tentacles are used to detect lightness and darkness.  Slugs prefer dark and moist areas.  The second pair of tentacles is located at the lower anterior end and functions as a nose.  These tentacles pick up chemical smells especially during mating season.  Most of the food sources are located by using both pairs of tentacles. ” 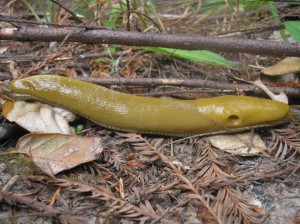 Slug from the Lesser Antilles

Probably NOT a Ghost Slug in Maryland