What Beetle is this?
From Kiama Australia, Caught this beetle last night, any ideas
Regards Richard 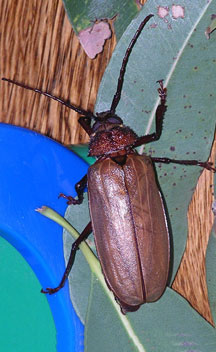 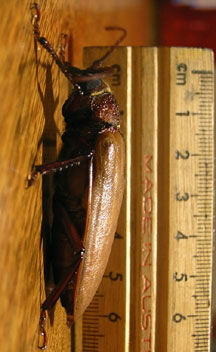 Hi Richard,
We have an idea, but only in a very general sense. It appears to be a Root Borer in the Family Cerambycidae, similar to the North American Prionus or Derobrachus.

Update (02/04/2006)
Australian Root Borer
Dear friends, The photo of the beetle sent in by Richard of Kiama looks remarkably like a picture in a book I have of a Banksia Longicorn: Paroplites australis (family Cerambycidae). The text says they are “slender reddish-brown beetles about 5 cm long with antennae of similar length. The larvae are large, fleshy, yellowish legless grubs, broades at the head end. ” The larvae bore tunnels in Banskia trees and pack it with the debris from their chewing. Regards,
Grev

Thanks for your update and after checking a few photos on the web, yes you are correct, this is exactly what it is. Thanks for the effort. Found this link http://www.ento.csiro.au/aicn/name_s/b_3121.htm
Best wishes from OZ
Richard

Correction:  November 18, 2016
Upon researching this new posting, we realized this is NOT a Banksia Longicorn, but Agrianome spinicollis based on this Prioninae of the World image and other online images.